GayTravel.com announced the winners of the 2018 Gay Travel Awards and the St. Regis Punta Mita Resort was on the list.

The international LGBTQ (Lesbian, Gay, Bisexual, Transgender, and Queer) community is one of the fastest growing segments within the tourism industry and has had a notable impact on the economy of the destinations.
The Riviera Nayarit has become a viable destination for this sector thanks to its efforts with inclusion and a tourist offer that includes infrastructure, culinary variety, quality, and luxury. The sector is an important part of the destination’s market diversification strategy.
The ongoing recognitions received by the properties and businesses that offer services to the LGBTQ community are testament to that. Such is the case with the St. Regis Punta Mita, one of the winners of the 2018 Gay Travel Awards in the “Beach Resort” category.
The awards announced on GayTravel.com acknowledge industry partners that welcome LGBTQ travelers around the world. This year they chose 25 winners from among more than 100 nominees. https://bit.ly/2so159D
LGBTQ tourists in general are within the high-spend category and seek exclusive services and products to consume, purchase a considerable number of souvenirs during their travels, and prefer to book high-value tours during their visit.
“The St. Regis Punta Mita Resort is one of the luxury brands that lend prestige to the Riviera Nayarit,” said Marc Murphy, managing director of the Riviera Nayarit CVB and the Bahía de Banderas Hotel and Motel Association (AHMBB). “It has received important awards and international recognitions since it opened in 2008, including the Gay Travel Awards this year. This inspires other companies to emulate their spirit of inclusion and acceptance.” 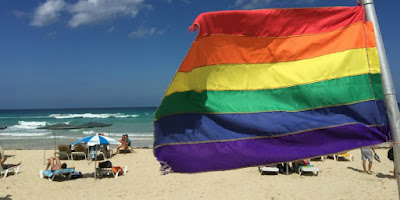 The hotel has also received the Five Diamond designation from the AAA, a recognition it obtained since it opened and is only awarded to those hotels that comply with the highest service standards.
Meanwhile, the W hotel brand—another high profile company in the Riviera Nayarit that is also very aligned with the LGBTQ segment—offers the AAA Four Diamond W Punta de Mita as another excellent hotel option for this niche.
Both properties are part of Marriott Hotels – Resorts Suites, a hotel company with a permanent campaign directed at the LGBTQ segment.
https://www.marriott.com/marriott/marriott-gay-travel.mi
MORE INFO:
###
The Riviera Nayarit Convention and Visitors Bureau (CVB) and the Bahía de Banderas Hotel and Motel Association (AHMBB) reaffirm their commitment to the strategic promotion of the destination, pursuing opportunities and consolidating new markets to increase the number of incoming tourists with the support of the Government of the State of Nayarit via the Tourism Promotion Trust (Fiprotur).
https://www.rivieranayarit.com/wp-content/uploads/2019/07/logox300.jpg 0 0 1stonthelist https://www.rivieranayarit.com/wp-content/uploads/2019/07/logox300.jpg 1stonthelist2019-01-14 06:20:002019-01-14 06:20:00Growth in high-end LGBTQ segment in the Riviera Nayarit

Riviera Nayarit and Puerto Vallarta, once again in the spotlight of Dutch tourism

Matt Damon And Other Celebrities In The Riviera Nayarit

Its Events Keep The Riviera Nayarit In The International Spotlight

Riviera Nayarit is making its debut as a Virtuoso Preferred Destination