Fruit is one of the wonderful gifts that Mother Nature gives us every day. It’s delicious, healthy and helps keep us in shape. Many are common and are part of our daily diet, but others are fairly unknown, with strange names from far away lands, which is why they’re called Exotic Fruit.
You may have seen them or even tasted them, been surprised by their appearance, their bright colors and unique flavor. Moreover, some of them have medicinal properties, which makes them even more attractive.
Did you know the state of Nayarit, with its tourism corridor of the Riviera Nayarit, is one of the most fertile places for the cultivation of this type of fruit? According to Sagarpa (Secretariat of Agriculture, Livestock, Rural Development, Fishing and Nutrition), the coastal municipalities have approximately 500 hectares and over 250 producers in Nayarit dedicated to the planting, harvest and commercialization of this type of crop.
Below is a list of 10 Exotic Fruits from the Riviera Nayarit. A trip to this tourism destination would be a fantastic opportunity for a taste: try them all!
1 Chico Zapote and Zapote Negro (Sapodilla)
Chef Betty Vazquez, Culinary Ambassador for the Riviera Nayarit, has called the Chico Zapote, the “Flavor King,”—and that’s not far from the truth! Its juicy pulp tastes very much like a pear and is truly delicious. In pre-Hispanic times, the Aztecs—who believed in its healing properties—called this fruit tzapotl. Its name stems from the Nahuatl word chictli, which means chicle, or gum.
The zapote negro is very prolific in Nayarit, although it’s native to the coastal areas of Chiapas, Veracruz and Yucatan and can even be found in the woodlands of Central America. When it’s ripe it turns green on the outside and brown on the inside and tastes sort of like chocolate. This fruit is harvested from August through January.
2 Huaya or Mamoncillo (Spanish Lime)
This fruit comes from the Dominican Republic and is also known as talpajocote, guayo, maco, limoncillo or quenepa. This is a sweet, small pink or light orange drupe. It can be eaten fresh, canned or even soaked in moonshine. It’s said to contain vitamins B1, B3, B6 and B12, as well as minerals, amino acids and unsaturated fatty acids. To find it you have to travel to the municipality of San Blas, north of the Riviera Nayarit.
3 Maracuyá (Passion Fruit)
Maracuyá is one of the best-known exotic fruits in the world. It can be found in Central America, some South American countries, southern region of Africa and in Australia. Though the main producer of maracuyá is in Brazil, it has been cultivated very successfully in Nayarit. Its taste is bittersweet and refreshing, and it has a round or oval exterior and a large number of seeds inside covered with pulp that can vary according to the species. This fruit can be found from October through April. 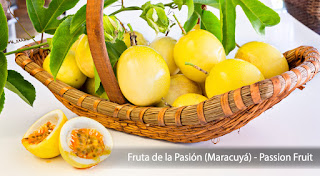 4 Mamey (Mammee Apple)
When traveling by road through the Riviera Nayarit, it’s common to see vendors in the stretches between towns on either side of the road selling this fruit. Its very bright salmon-colored exterior covers pulp that tastes like honey and almonds. This pulp is creamy, soft and sweet—perfect for ice cream, shakes and different desserts. The mamey is part of the zapote family and is produced mainly between January and July.
5 Mano de Buda (Fingered Citron)
The Mano de Buda (Buddha’s Hand) is from the citrus family, and its fruit is fragmented in sections that look like fingers or tentacles. It’s venerated in some Oriental cultures because it looks like the Buddha’s hand in prayer, ergo the curious name. It has a slightly sweet taste and its color varies from green to yellow as it ripens. It’s also very aromatic, which is why it’s used in China and Japan to perfume rooms and closets, as well as for liqueurs and cocktails. Currently they cultivate it in small farms in Aticama in the municipality of San Blas.
6 Mangostán (Mangosteen)
This delicious fruit has healing properties, according to its fans, and for centuries it has been used in traditional medicine in different parts of the country. It can be found in the town of Aticama, very close to the port of San Blas, although it originated in the more tropical countries of Southeast Asia, including Indonesia, Thailand and Malaysia. It’s also known as the mangostino or jobo de la India (Garcinia mangostana) and notwithstanding its name it isn’t related to the mango. 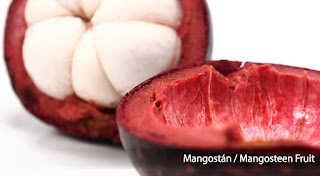 7 Yaca (Jackfruit)
This fruit is also known as the árbol del pan and it elicits pretty intense reactions: you either hate it or love it. Although it tastes sweet, it can be overly so, and some people find its odor off-putting. The yaca arrived in the Americas in the 18th century from Indonesia and Malaysia, where it found in the Riviera Nayarit the perfect climate conditions for its growth. It stands out for its large size, with a diameter anywhere from 25 to 60 centimeters and can weigh up to 20 kilos; its flavor is close to a combination of banana, melon and papaya. It’s also known for its anti-asthmatic and anti-diarrheal properties, as well as being one of nature’s most potent aphrodisiacs.
8 Guanábana (Soursop)
The state of Nayarit is the top producer of guanábana on a national level, with 16 thousand tons per year, according to data from Sagarpa. The main municipalities where this fruit is produced are Compostela, Xalisco, San Blas, Bahía de Banderas and some in Santiago Ixcuintla; there are currently one thousand families dedicated this crop with two thousand hectares being cultivated. It’s also exported to the United States, Europe and Asia. Its delicious bittersweet flavor is great in desserts, ice creams, frozen pops, juices, marmalades, candies and much more. The guanábana is also said to have healing properties, which is why its consumption has increased considerably in the last decade.
9 Rambután (Rambutan)
This fruit originated in the Malaysian archipelago: its name means “hairy” in that language, thanks to its unique appearance. It has an intense red color and its flavor is a mixture of coconut, pineapple, grapes and lychee. Even though it hails from Asia, the rambután has become so popular that it’s also being grown in other countries including Mexico and Hawaii. In the Riviera Nayarit they have been able to establish small orchards thanks to the climate and land conditions. 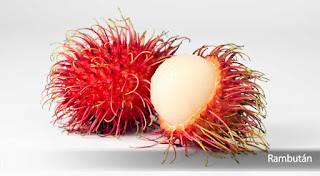 10 Litchi (Lychee)
Among the many exotic fruit that can be found in the Riviera Nayarit it is, perhaps, one of the best known and valued, especially in the culinary arena and in the preparation of cocktails. It’s known as lichi, lychee, leechep, leche, lin-chi or litchi, and its Asian name, lee-chee, means “provider of the joy of living.” This fruit is sweet, small, translucent and white on the inside, and is originally from southern Asia, especially China and Bataan, where lychee soup is very popular.
Extra: The state of Nayarit is so rich, that besides the aforementioned fruit one can also find tropical delights such as mango, pineapple, guava, nanci or nanche (nance fruit), pitahaya (dragonfruit), carambolo (starfruit), tamarind, plum, marañón (cashew apple), and bananas.
https://www.rivieranayarit.com/wp-content/uploads/2019/07/logox300.jpg 0 0 1stonthelist https://www.rivieranayarit.com/wp-content/uploads/2019/07/logox300.jpg 1stonthelist2017-10-20 15:10:002017-10-20 15:10:0010 Exotic Fruits Of The Riviera Nayarit