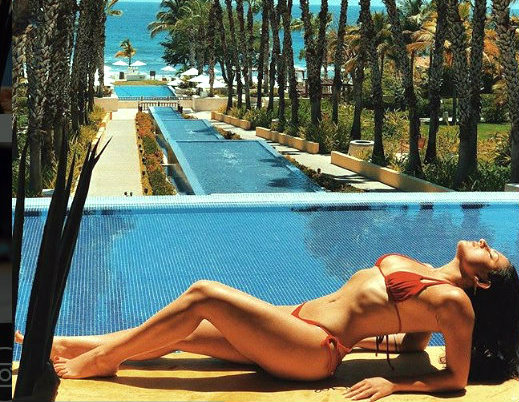 The Riviera Nayarit continues to shine as one of the A-listers’ favorite places to go. It’s just a few short weeks before summer arrives, but already several celebrities have visited the destination, some for a little R&R and still others for work, but not a single one could escape the charm, the luxury, and the good vibes of Mexico’s Pacific Treasure.
This is how, week after week, social media gets “flooded” with their images enjoying the sun, the warm beaches, and the comforts of the destination’s magnificent hotels, which contributes to its diffusion, since some of these celebriteis have millions of followers in their accounts.
Below you’ll find just a few of the celebrities who visited the Riviera Nayarit during the month of May:
No Manches Frida 2
One of the most recent examples was a visit by the entire cast of the movie No Manches Frida 2, which was filmed on location here from May 6th to June 8th. Most of the filming took place at the W Punta de Mita, where the official “clap” of the slate was heard on Tuesday, June 5th in the presence of leading actors Martha Higareda and Omar Chaparro, as well as Itatí Cantoral, Aarón Díaz, and Raquel Garza, plus director Nacho G. Velilla and producer Mauricio Argüelles.
The first part of No Manches Frida—produced by Pantelion Films—opened in September 2016 and become the 4thhighest grossing movie in the history of Mexican cinema, raking in over 220.9 million pesos, while in the US it brought in $11,528,613, giving more than enough reasons for a sequel.
“Movies and tourism go hand in hand and that’s why we chose to film in Puerto Vallarta and the Riviera Nayarit, they’re places that show off the beauty of Mexico,” commented actress Martha Higareda. “Movies travel all over the world and we want people to see this beauty and come visit our country.”
In this respect, Marc Murphy, director of the Riviera Nayarit Convention and Visitors Bureau (CVB) and the Bahía de Banderas Hotel and Motel Association (AHMBB), said the filming of this movie represents a very important promotion for the Riviera Nayarit within the domestic and international markets, as it will be shown on 1,500 theater screens across Mexico, some countries in Latin America, and the United States in early 2019. 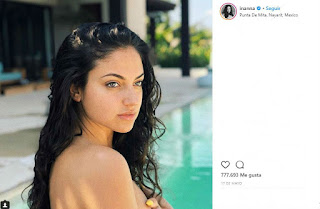 Inanna Sarkis
In mid-May the Riviera Nayarit welcomed beautiful model and YouTuber Inanna Sarkis, who stayed at the St. Regis Punta Mita Resort on the Glamour Peninsula. Beginning on May 17th Innana published several images on her social media accounts, where she’s very popular—just one of the posts garnered 800 thousand “likes.”
Twenty-four-year-old Inanna Sarkis conquered thousands of hearts with her sensual moves as “Daphne Blake” and her interpretation of the song “Scooby Doo Papa.” She’s part of the group of influencers lead by Lele Pons and Juanpa Zurita, and has over 7 million followers on her Instagram account and 8.2 million followers on YouTube.
https://www.instagram.com/p/Bi4ePU_gxDh/?taken-by=inanna
Paulina Goto and Horacio Pancheri
Also in May, the W Punta de Mita hotel played host to Mexican actors Paulina Gozo and Horacio Pancheri. The charismatic couple, who recently celebrated their second anniversary, posted images on their respective Instagrams right away of the fun they were having on the beaches of the Riviera Nayarit.
Both Paulina and Horacio are very popular on social media both individually and as a couple. Together they have nearly 4 million followers just on Instagram.
“Thanks for your gorgeous beauty, Nayarit,” wrote Pancheri in one of the photos she shared, where she’s seen walking along the beach. In another post you can see the actors dressed in white from head to toe enjoying a Mexican theme night at the hotel.
https://www.instagram.com/p/BjREY3CgsVf/?taken-by=paulinagoto
Susana Rentería
Mexican actress and model Susana Rentería, who rose to fame thanks to her relationship with singer Maluma, visited Mexico’s Pacific Treasure at the end of May, staying in a luxury hotel in Nuevo Vallarta, after which she moved to the W Punta de Mita.
Susana Rentería began modeling when she was only 13 years old; she also participated in beauty contests and music videos including US rap singer Flo Rida’s very popular “Whistle.” She’s currently the owner of a fashion brand in Mexico City and has over 480 thousand followers on her Instagram account.
https://www.instagram.com/p/BjUrRYqj6XJ/?taken-by=susanarenteriaoficial
Nikki Ogunnnaike
Nikki Ogunnaike, Style Director at ELLE.com, the biggest fashion and beauty website on the Internet, was in the Riviera Nayarit from May 25-29 at the W Punta de Mita hotel. The famous fashion editor, originally from Nigeria, represents the brand on TV and video, and has more than 26 million followers on Instagram.
During her visit, Nikki not only enjoyed the hospitality of the hotel but also took the time to visit nearby places, including the Magical Town of Sayulita. In one of her posts she wrote: “Peace out Mexico! Thanks for the tacos, tequila, workouts, and dance parties.”
https://www.instagram.com/p/BjSZMZJDuJE/?taken-by=nikkiogun
Valeria Baroni
The Argentine actress, singer, dancer, and host Valeria Baroni was another celebrity who chose this destination to enjoy a few days of rest and relaxation. Valeria is known as the host of the Zapping Zone show, which transmits all over Latin America on the Disney Channel. She has over 387 thousand followers on Instagram.
https://www.instagram.com/p/BirkbnLgLQT/?taken-by=valeriabaroniok
###
The promotional work done by the Riviera Nayarit Convention and Visitors Bureau (CVB) and the Bahía de Banderas Hotel and Motel Association (AHMBB), with the support of the Government of the State of Nayarit via the Tourism Promotion Trust (Fiprotur), is amplified by the arrival of celebrities who receive ample media coverage and position the destination as one of the best in the world.
https://www.rivieranayarit.com/wp-content/uploads/2019/07/logox300.jpg 0 0 1stonthelist https://www.rivieranayarit.com/wp-content/uploads/2019/07/logox300.jpg 1stonthelist2018-06-12 09:48:002018-06-12 09:48:00The Riviera Nayarit: A Favorite With Celebrities