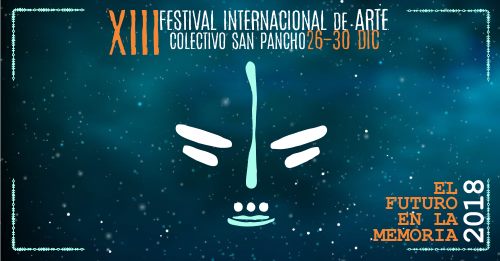 The 13th edition of the International San Pancho Arts Collective Festival kicks off from December 26th through the 30thwith the slogan “The Future is in the Memory.” The event is one of the iconic happenings of the Riviera Nayarit’s Cultural Capital.
The festival started thirteen years ago as a venue to showcase and share the local art and culture of San Pancho, a town that has become known as a united, participatory, and responsible community. This year’s event includes multiple workshops in dance, theater, music, literature, performance, photography, video, multimedia, painting, sculpture, martial arts, sports, and other disciplines.
According to the organizers, after thirteen years and a natural evolution, the Festival has entered into its adolescent phase and the “dream is starting to mature.” According to organizers, the slogan “The Future is in the Memory” refers to memories of the prophetic visions of our ancestors.
“We’re building history as we’re tracing the path of this collective voyage,” says the San Pancho Collective. “We want to sustain our destiny by creating memories. We want to hold onto our roots while we extend the branches, we want to bear good fruit, provide good nourishment. This earth is our home, we’ll plant new trees, and become flowers once again. We’ll fly until our dreams can catch up with us and connect us to reality. Together we create.”

Musical presentations, workshops, conferences, and exhibits
The XIII International San Pancho Arts Collective Festival 2018 program is varied and includes several different manifestations of the arts. The inauguration took place on December 26th with a fire ceremony; this Friday will include a presentation by Rubén Albarrán, musician and composer for the band Café Tacvba, starting at 11:15 p.m. in the DJ Set.
The music show begins at 6 p.m. at the Plaza del Sol with presentations by the Niwarika Folkloric Ballet, Iván Antillón, The Remedy, Ho’omaka Danza Polinesia, Thomas Blanchett and his marionettes, and Ampersan, among others.

The program continues on Saturday the 28th with The Jokers, Baldango, Pura Vida Aguacate, Loborama, and Kin Performance (acrobats). It ends on Sunday with Caravane, Karen Bentley Pollick, The Rob Cavazinni Band and Los Cojolites, just to mention a few. A second program with conferences, workshops, movies, and exhibits is running concurrently, as is the traditional verbena.
For more information and details on the program please visit the Colectivo San Pancho page at: https://www.facebook.com/colectivosanpancho/
###
The Riviera Nayarit Convention and Visitors Bureau (CVB) and the Bahía de Banderas Hotel and Motel Association (AHMBB) reaffirm their commitment to the strategic promotion of the destination, pursuing opportunities and consolidating new markets to increase the number of incoming tourists with the support of the Government of the State of Nayarit via the Tourism Promotion Trust (Fiprotur).
https://blog.rivieranayarit.com/wp-content/uploads/2018/12/festival-sinergiarte-1.jpg 261 500 1stonthelist https://www.rivieranayarit.com/wp-content/uploads/2019/07/logox300.jpg 1stonthelist2018-12-28 10:33:002020-07-16 07:36:19XIII International San Pancho Arts Collective Festival 2018

The Riviera Nayarit Is An Ideal Destination For Sport Fishing

Pre-Summer Promos Have Arrived In The Riviera Nayarit!
0 replies