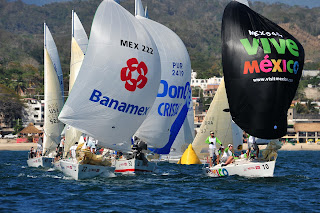 On October 14, the Federal Government through the Ministry of Navy officially announced the Regata Copa Mexico Olympic Edition, which will take place in Riviera Nayarit on March 2nd to 18th, 2012. The event is expected to include the participation of over 2,500 competitors from 26 countries, which will compete in seven different nautical event categories.
“The organization of high-endurance nautical sports events allows us to reach a key niche market to attract tourism to Riviera Nayarit. In 2010, the event resulted in a high number of visiting competitors from 20 countries, and provided the necessary conditions to promote our destination and to generate economic benefits for the local population. In 2012, we’re expecting these benefits to be even greater”, stated the President of the Convention and Visitors Bureau (CVB) of Riviera Nayarit, Fernando González Ortega.
The Regata Copa México Olympic Edition has the objective of promoting the natural beauty and the infrastructure of Mexico’s Pacific coast, in order to increase tourism in our country, by reactivating the economy and supporting sailing. The Federal Tourism Ministry, the state Government of Nayarit, the Mexican Sail Federation, and the CVB of Riviera Nayarit will all participate in the organization of this event.
The participating categories of the Regata Copa Mexico will be Mexorc (Oceánicas), J24, Windsurf, Kitesurf, Laser, 420, and Optimist, the latter assembling a number of young competitors between 6 and 14 years old.
These competitions will be framed by the Nautical Extravaganza, which will take place next March in Riviera Nayarit, as at least another three major nautical events will take place here: The Vallarta Race, a competition between San Diego and banderas bay on March 1st to 10th, the International Banderas Bay Regatta, which will be hosted by the Vallarta Yacht Club of Nuevo Vallarta, taking place on March 20th to 24th, and the Punta Sayulita Longboard & SUP Classic, which will assemble the best international surfers between March 9th and 11th.
COPA MEXICO, NAUTICAL EDITION PRELIMANARY CALENDAR
J24                  March 2 – 9
Windsurf        March 7 – 10
Kitesurf          March 10 – 18
Mexorc           March 11 – 17
420                  March 12 – 14
Láser               March 16 – 18