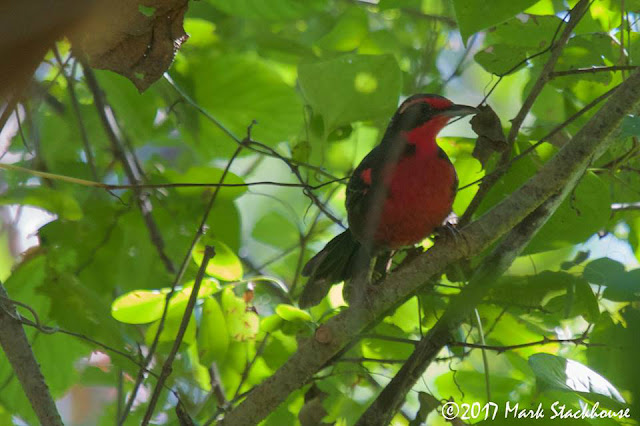 The San Blas Christmas Bird Count took place January 2-7, 2018, with the participation of over 30 watchers from Mexico, the United States, Canada, the United Kingdom and Italy; and accounting for 266 species and 9,591 birds on Count Day alone. During Count Week, however, they reached a total of 285 species and some 16 thousand birds.
The Christmas Bird Count has been undertaken since 1973 by the San Blas Birdwatchers Club and coordinated by Marck Stackhouse—a renowned tourist guide and photographer, with over 40 years’ experience leading birdwatching tours on the American continent—together with the Audubon Society of the United States, where the society was founded some 120 years ago.
This year the count took place within a 24-kilometer radius in the municipality of San Blas, from Tecuitata to Chacalilla and from the mountain of Mecatán down to the sea.
In regards to the results obtained, Stackhouse informed that even though the total number of species observed was less compared to last year when they accounted for the 285 seen on Count Day and the 306 at the end of Count Week, this year they did have a bigger number of watchers, mainly from the United States, Canada and Italy, as well as some Mexican states such as Nayarit, Jalisco, Mexico City, and Monterrey. This established a new participation record, as last year they only had 22.
That fact notwithstanding, he added, the absence of birds that generally fly into the beach zone was notable and included the ruddy turnstone (Arenaria interpres), the sanderling (Calidris alba), the surfbird (Calidris virgate), and the least tern (Sternula antillarum). It’s possible to attribute their disappearance to an increase in the number of tourists that visited the region within the past year and the opening of the Tepic-San Blas highway.
On the other hand, and also due to the fact the highway actually increased the observation area, this was the first time certain species were registered including the Mexican whip-poor-will (Antrostomus arizonae), the flammulated flycatcher (Deltarhynchus flammulatus), and the Bewick’s wren (Thryomanes bewickii).
A birding destination
The Riviera Nayarit is part of the western migratory route for birds that travel from North America towards the South. Some of these species are emblematic of the region, an attraction for international tourism. In this context, San Blas has turned into one of the most famous locations for birdwatching in all of Mexico and perhaps in North America thanks to its different types of habitats: open water, beaches, freshwater marshes, saltwater marshes, swampy mangroves, lowland jungles, farmland, groves, and tropical forests, among others.
Importance for tourists
Marc Murphy, director of the Riviera Nayarit Convention and Visitors Bureau (CVB) and the Bahía de Banderas Hotel and Motel Association (AHMBB), pointed out that birding has become an important promotional tool for the destination.
There are approximately 47 million birders in the United States, out of which 18 million have traveled beyond their borders to engage in their activities, according to the 2013 National Survey of Fishing, Hunting and Wildlife-Associated Recreation.
Meanwhile, Great Britain is home to an important number of watchers, who are people with high purchasing power belonging to the destination’s natural market. Canada and Italy are two other important countries of origin for birders, which makes these Christmas Bird Counts very valuable as the largest and longest-lasting citizen science projects in the world.
###
The Riviera Nayarit Convention and Visitors Bureau (CVB) and the Bahía de Banderas Hotel and Motel Association reaffirm their commitment to the strategic promotion of the destination, seeking areas of opportunity such as birdwatching, consolidating new markets with the purpose of increasing tourism, with the support of the Government of the State of Nayarit via the Tourism Promotion Trust.
https://www.rivieranayarit.com/wp-content/uploads/2019/07/logox300.jpg 0 0 1stonthelist https://www.rivieranayarit.com/wp-content/uploads/2019/07/logox300.jpg 1stonthelist2018-01-08 15:44:002018-01-08 15:44:00The Riviera Nayarit “Flies” Towards Becoming The Top Birding Destination

LIVE IT TO BELIEVE IT IN THE RIVIERA NAYARIT: Novillero, Endlessly Beautiful

Dutch press and travel agents will tour in Riviera Nayarit

Frontier Airlines Launches Winter Service From Chicago To The Region 5 Luxury Experiences in the Riviera Nayarit