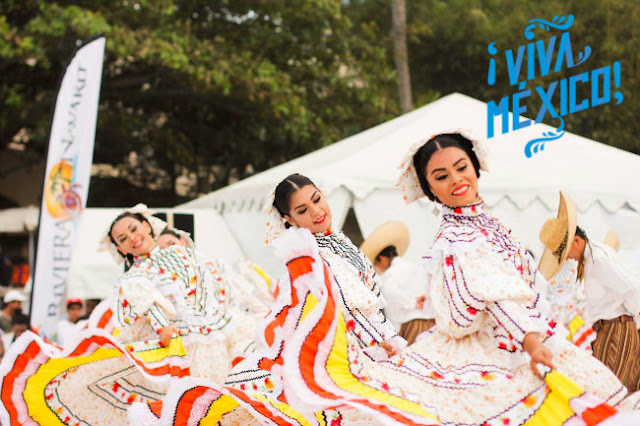 Hotels in the Riviera Nayarit have programmed several events to celebrate Mexico’s Independence Day on September 15th. There’s no doubt it’s one of the very best times to spend a few days in this destination.
Tequila, mariachi bands, Mexican delicacies and plenty of fun—not to mention some spectacular dinners with renowned chefs—are all part of the programs created by some of the resorts to welcome their visitors.
Here’s a peek at some of the activities:
Kupuri Punta Mita Beach Club
Kupuri Beach Club invites its guests to celebrate Mexico’s Independence with famous Mexican Chef Antonio de Livier, visiting from Demetria restaurant in Guadalajara. He’ll be offering a very Mexican four-course dinner for the evening of September 15th. There will be a live transmission of the Independence ceremony, which will be taking place at Mexico City’s Zócalo, starting at 9 pm. On September 16th the party continues at Frida restaurant, where the author of “Let’s Cook” will prepare an exceptional four-course menu in honor of Mexico, as part of an unforgettable night. For more information click: http://bit.ly/2xvkn1g
Marival Resort & Suites
Marival Resort & Suites extends an invitation to its grand Mexican Fiesta on September 15th that includes a spectacular buffet and unlimited tequila. The party starts at 6:30 p.m. in the Marival Grand Salon, where attendees can watch the Grito ceremonies on live TV. There will also be mariachi bands playing, folk dancing and fireworks. Don’t miss the after-party at the Caesar disco. For details: http://www.marival.com.mx/
Samba Vallarta
Expect some very Mexican events at Samba Vallarta. On Friday there will be a Mexican Fair during the day and raffles at night, where the participants can cash in the play money they won at the fair. On Sunday, visitors can enjoy rides on the El demoledor (The Bone-Crusher) and on the evening of September 15th the resort will offer a folkloric ballet presentation, a Mexican dinner and a mariachi band. The entire month of September they will also feature the palo encebado, or greased pole, from Monday through Friday.
Reservas: https://www.sambavallarta.com/es
The St. Regis Punta Mita Resort
Carolina, The St. Regis Punta Mita Resort’s signature restaurant and recipient of the AAA Five Diamond award, will be celebrating Independence Day with a special menu prepared by two chefs. Signature chef Jesús Durón will open his kitchen to Chef Diego Niño, winner of the 2016 Millesime Young Talent award, from Mexico City’s Nexo restaurant. Together they will create a special dinner to commemorate Mexico’s Independence, accompanied by wines from the house of Monte Xanic. Durón and Niño, both talented young representatives of the nation’s cuisine, will offer attendees an interesting look into their own work with some of the best chefs in the world including Joan Roca and Martín Berasategui, as well as the influence of the Riviera Nayarit on their cooking.  The drink menu will be complemented by the Maestro cocktail, in honor of the patron hero of Nayarit, created by Jorge Carrillo, the resort’s head mixologist and winner of the 2016 Hennessy Very Special award.
For more information click: http://bit.ly/2y2UGSL
Vidanta
Vidanta has prepared a spectacular evening in their Convention Center, which includes a Mexican buffet, open bar with national spirits, fair games, prizes, live music and folkloric dances with more than 20 people on stage. Take advantage of your Vidanta Card discounts!
Click: http://www.vidanta.com/es/destinations/nuevo-vallarta
Villa La Estancia
Villa Group hotels Villa La Estancia and Villa del Palmar Flamingos are celebrating the entire month of September with plenty of good food, folklore and Mexican culture. Every Monday visitors can enjoy a Beach Party starting at 7 p.m. On Wednesday it’s Mambo Kings Night and a folkloric ballet; and for movie lovers, there will be Mexican Movies Under the Stars. The resort is also offering Mexican drinks and mescal tastings.
On the evening of September 15th the party starts at 7 p.m. near the pool with several activities: lottery, piñata-making class, guacamole-making class, Huichol art, mixology classes, a burro race and much more. For details:  http://bit.ly/2wYypH7
W Punta de Mita
W Punta de Mita, famous for its vibrant décor inspired by the Wixárica culture, is celebrating the occasion with a taco-fest on the evening of September 16th at the Venazú restaurant. The taco-fest includes different meat options; a corn-on-the-cob and esquites (corn in a cup) station; Mexican desserts such as churros and flan; music; and a wonderful view of the iconic hotel.  Meanwhile, tricolor shots will be served to guests on the WET deck around the pool, so they can celebrate with a very Mexican taste of the resort’s authentic cocktails. For more information: http://www.wpuntademita.com/
https://www.rivieranayarit.com/wp-content/uploads/2019/07/logox300.jpg 0 0 1stonthelist https://www.rivieranayarit.com/wp-content/uploads/2019/07/logox300.jpg 1stonthelist2017-09-14 08:26:002017-09-14 08:26:00Come Celebrate Mexico’s Independence Day In The Riviera Nayarit

The Riviera Nayarit’s hotels share message of solidarity and hope Price Travel: The Riviera Nayarit is among the most sought-after destinations

Riviera Nayarit is looking to attract tourism from South America