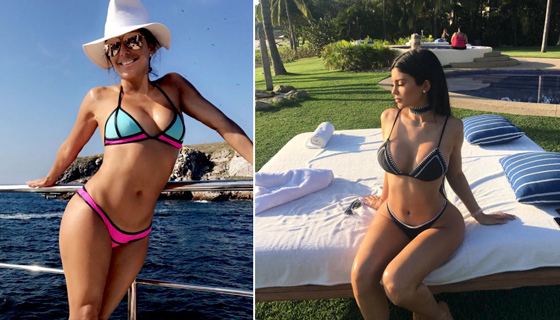 The Riviera Nayarit waved goodbye to 2016 with the presence of Eva Longoria and welcomed 2017 with a visit from Kylie Jenner and her boyfriend, Tyga. Punta Mita, the Riviera Nayarit’s Glamour Peninsual, has become the favorite rendezvous of celebrities who visit the destination.
Eva Longoria made her second visit of the year to the destination during the last week of December—she had already visited Mexico’s Pacific Treasure in the month of July, staying on both occasions at the Four Reasons Resort Punta Mita. She posted beach pics on her Instagram account, including one with the Islas Marietas in the background.
Kylie Jenner is another repeat celebrity visitor, as are the other Kardashian sisters. They always stay with businessman and producer Joe Francis, a friend of the family. The young model showed off her spectacular figure during her stay the first few days of the year, which she enjoyed with her boyfriend Tyga and a group of friends. They also headed out on a zip-line adventure at Rancho Mi Chaparrita.
Russian model Anna Vialítsyna, AKA Anne V and a world-class celebrity for her appearance in the Sports Illustrated swimsuit edition for ten years in a row, started out the New Year with her family in Punta Mita.
The ex-starter for Club Guadalajara, Omar Bravo, is a frequent traveler to the destination, and he visited before Christmas and after New Year’s, staying both times in Nuevo Vallarta. On his last visit he was seen eating at Nicksan. Rodolfo Cota, current goalie for the Rebaño Sagrado, spent a few days before Christmas at The St. Regis Punta Mita Resort.
TV Azteca sports personalities, Carlos Guerrero and Antonio Rosique bragged about their stay in Nuevo Vallarta during their coverage of the Beach Polo Cup, as did Karen Manzano, TV host for Televisa.
David Ortega, actor for Televisa, showed off a pic of Sayulita this week, as well as other images taken at different beaches around the region. Producer Memo del Bosque and Telehit hosts Claudio Rodríguez, Uriel del Toro and Román Guzmán received the New Year in Sayulita, where.
Other celebrities spotted included several yogis, designers, musicians, TV hosts, bloggers, YouTubers and influencers, all of whom have thousands of followers. Among the best known names: Ming Lee Simmons, Linsay Riding, Manu Espinosa, Cindy Kimberly, Fer Altuzar, Joel Fuller, Illma Gore, Lisa Breckenridge, Adam Senn, Argelia Atilano, Tadeo from Acapulco Shore, Max Emerson, Dominika Paleta, Kristen Taekman, Lalo Brito and La Isla’s Jimena Ochoa.
Check out their pics below:
Eva Longoria: https://www.instagram.com/p/BOXvVOvAmkj/?taken-by=evalongoria&hl=es
Kylie Jenner: https://www.instagram.com/p/BO2ZSATBsLw/?taken-by=kyliejenner
Anne V: https://www.instagram.com/p/BOvotDkA8T5/
Omar Bravo: https://www.instagram.com/p/BOq8JxmF4AG/?taken-by=pammela28
Rodolfo Cota: https://www.instagram.com/p/BNifJdsBqBh/?taken-by=rodocota
Antonio Rosique and Carlos Guerrero: https://pbs.twimg.com/media/Cz_nKABUsAAc_qq.jpg:large  Karen Manzano: https://www.instagram.com/p/BOLb6qQFwjH/
David Ortega: https://www.instagram.com/p/BOybTzFlUXK/?taken-by=davidortega55
Memo del Bosque and Telehit crew: https://www.instagram.com/p/BOtYMSwABKI/
https://www.rivieranayarit.com/wp-content/uploads/2019/07/logox300.jpg 0 0 1stonthelist https://www.rivieranayarit.com/wp-content/uploads/2019/07/logox300.jpg 1stonthelist2017-01-09 07:00:002017-01-09 07:00:00The Riviera Nayarit Waved Goodbye To 2016 With Eva Longoria And Welcomed 2017 With Kylie Jenner

In Only 11 Months, 2016 Surpassed The Numbers From 2015 In The Riviera Naya... Two Hippie Hot Spots To Visit This Year Along Mexico’s Pacific Coast
Scroll to top