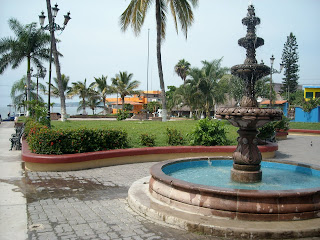 Last night at about 11:00 p.m. here it came again, lighting, thunder and rain. After about 10 weeks of these night time storms I have had enough! You see we have a roof that leaks in the mid-section of our restaurant, between the dining room and the kitchen. It doesn´t effect the business operation but it leaves a huge puddle of water each and every morning. Unable to repair the roof until the rain stops, perhaps you can understand my feelings towards the night time rains this year, it´s been like a monsoon!
When I expressed my feelings to my all understanding husband he said ¨Shame on you¨. I should have known better but just the same, I ask him why? He started off by asking what I was going to do tomorrow morning, even though he knew the answer. I was going surfing, the sun would be out and the surf would be great! After that his inputs were like a snow ball rolling down hill.
He went on to mention the wars and uprisings currently going on in North Africa, the economic disaster that is facing most of the first world countries, the crime that our border cities are facing then topped that off with giving a detailed account of the devastation that the winds and floods have done to lives of those on the East Coast of the U.S..
Just when I thought he might be done he went on to inform me about the current transportation available in the Northeast, roads, bridges washed out, subways, busses and air travel has come to a stop. Not to mention the people who had planned vacations or cannot get home from their vacations! How would you like to be held up in an airport for 3 to 5 days just trying to get to your home, only to access the damage it incurred?
He finished with this, we live in a place compared with the most beautiful on earth, yes we have to contend with some rains in the summer but soon they will end. We do not have to live with any natural disasters nor are we bothered by wars or the violence that the drugs bring to other regions through out North America. The area we call home is often described as a paradise and by October 18th the rains and humidity will have passed, it will be 78 degrees during the day with a cool breeze in the evenings. The season will have arrived, the crowds will be back and we will fix the roof!
Shame on me,
Eva Maria Terry
Eva´s Brickhouse
Bucerias Nayarit, Mexico
https://www.rivieranayarit.com/wp-content/uploads/2019/07/logox300.jpg 0 0 1stonthelist https://www.rivieranayarit.com/wp-content/uploads/2019/07/logox300.jpg 1stonthelist2011-08-30 15:12:002011-08-30 15:12:00Shame on me by Eva Maria Terry