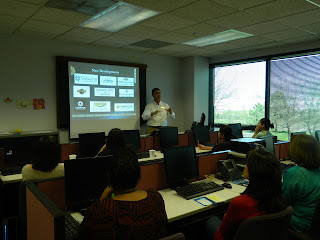 •    During the III Annual Mexico Day, Mexico’s Pacific Treasure and the CPTM introduced the competitive benefits of vacationing in Mexico to agents of one of the most important travel wholesalers in the United States

In Riviera Nayarit luxury is our nature, and our nature has captured the attention of Apple Vacations, which last September 11 granted the Crystal Apple Award to Riviera Nayarit as the best destination in the world. The wholesaler also invited Mexico’s Pacific Treasure to represent Mexico in their III Annual Mexico Day, which took place in their main offices in Chicago.

For 4 hours, the Convention and Visitors Bureau (CVB) of Riviera Nayarit and the Council for the Promotion of Tourism of Mexico presented the competitive advantages of our destination to travel agents from this wholesaler.

They also offered a seminar for some of the attending agents, and a webinar for the hundreds of agents that work from home. They were all able to get aquatinted personally with the benefits and news in Riviera Nayarit in order to offer them to their clients.

Apple Vacations was founded in 1969 and was one of the first charter companies established in North America, and the first one to introduce the “All Inclusive” package. Its founders realized that they had a significant business opportunity by offering vacations to exotic destinations for a fraction of the cost of using traditional airlines; back then, international travel was considered a luxury, and Apple Vacations has contributed to creating a culture of high-quality travel at an affordable price.

For over 40 years, this wholesaler has managed to become one of the key players in this market, with over 2,000 employees and offices in 20 cities in the United States. This is the reason why the association that has been established between Riviera Nayarit and Apple Vacations is an important factor to attract tourists to our destination.

The promotional work being done by the Convention and Visitors Bureau (CVB) of Riviera Nayarit seeks the expansion of the touristic industry in order to benefit the People, following the direction set by Governor Roberto Sandoval Castañeda.