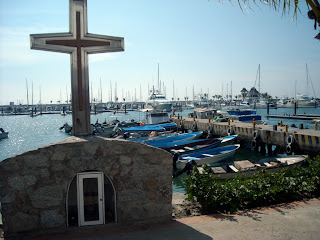 La Santa Cruz is a tradition that defines Riviera Nayarit, a magical destination where natural wonders and culture are intertwined. The event will take place at La Cruz de Huanacaxtle next May 3rd.
Starting on April 25th, and extending for nine days, the whole town celebrates while the bells in the small church toll, and the streets are filled with stands that offer food and traditional games, and the sky is painted with the colors of fireworks.
However, the most anticipated event is a large religions celebration called La Santa Cruz, taking place on May 3rd. The town has embraced this celebration and made it its own, and as one popular saying states: “the name bears the penance”, and they have named their town La Cruz de Huanacaxtle.
However, the original name of this town is not based on this religious celebration. Although the town’s name is La Cruz de Huanacaxtle, the origins of this name remain unknown. There are several possibilities, like the abundance of this tree in the region, or even a legend that says that a peasant traveling in the area of the Bahia de Banderas valley towards Punta de Mita found this beautiful location and rested under the shade of a huanacaxtle tree.
The peasant liked the place so much, that he decided to mark a cross in the tree before leaving, with the conviction that some day he would come back to this place, identify that tree which gave him a break from the sun and would build his home there, thus creating the name La Cruz de Huanacaxtle (The Cross of Huanacaxtle). The truth is that no one can verify this story, and at the entrance of town there is a huge cross, made out of wood and adorned with pink, purple and blue decorations during the festivity.
These three colors embellish the town on May 3rd. However, the most impressive feature is the passage of the local fishermen’s boats on the water. These boats set sail early in the morning, decorated with these three colors and displaying the Santa Cruz (Holy Cross). Later in the day they go back to church to attend mass.
This simple but beautiful celebration that is one of the many reasons that set Riviera Nayarit apart from other beach destinations.
This year’s Fiestas de La Santa Cruz de Huanacaxtle will kick-off with an open-to-all parade Thursday April 25th, starting at the back of the El Mangal Colonia, proceeding to the Punta de Mita highway, and then briefly south on main entry street Ave. Langosta, then zig-zagging down the east/west streets and ending at the main Plaza Benito Juarez.
The parade will commence at 6PM.  Once at the main Plaza, there will be a presentation of this year’s contestants for May Festivals Homecoming Queen and a variety of live music will follow in the Plaza.  Extensive food and drink from throughout the region will be available this and every night.
The schedule
Fri. April 26th- ROCK NIGHT in the Main Plaza starting at 9 PM. Bands to be announced.
Sat. April 27th- May Festival Homecoming Queen contest and free dancing in the Plaza with LA IMPONENTE Band starting at 8 PM.
Sun. April 28th- Fiesta Folclórica featuring the Tintoc Municipal Ballet Company and the La Cruz Hawaiian Dance Company with guest vocalists. Games and contests start at 8 PM.
Mon. April 29th- REGGAETON Night featuring YAIR, ARAM and others to be announced.
Tues. April 30th- Children’s Day featuring games, contests and prizes for kids and the Children’s Hawaiian Dance Group of La Cruz de Huanacaxtle.
Wed. May 1st-  A Musical Evening featuring Mary La Nayarita and singers from La Cruz and Nayarit starting at 9PM.
Thur. May 2nd- FREE NIGHT OF MUSIC AND DANCE in the Plaza featuring the Municipal Symphony Orchestra starting at 9PM.
Fri. May 3rd- RELIGIOUS FESTIVAL – Live Music and free snacks in the Plaza to celebrate the end of the May Festival.  Charro Horse dance, Maceualoyan Ballet Folclórico Group of La Cruz and the Taiyari Ballet Folklorico Group of Mezcales.  Fireworks and fair.
https://www.rivieranayarit.com/wp-content/uploads/2019/07/logox300.jpg 0 0 Marc Murphy https://www.rivieranayarit.com/wp-content/uploads/2019/07/logox300.jpg Marc Murphy2013-04-23 09:24:002013-04-23 09:24:00Riviera Nayarit fills with color

The Riviera Nayarit Keeps its Beaches Safe and Clean for Vacationers

12 Can’t-Miss Events in the Riviera Nayarit for November

International arrivals to the Riviera Nayarit increased by 3.5%
0 replies

Riviera Nayarit is seeking to attract the Texan market this summer The latest Yann Arthus-Bertrand documentary is being shot in Riviera Nayari...
Scroll to top