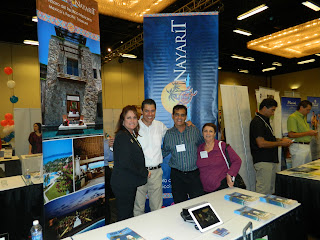 In Riviera Nayarit luxury is our nature, and this is what we presented to 500 travel agents in Texas together with Funjet Vacations, as part of the strategies to attract visitors from this region during the summer, when the high temperatures make them travel to the best vacation destinations in the world.
The touristic offerings of the destination known as Mexico’s Pacific Treasure were presented on April 8 and 9 in the Texan cities of Dallas and Houston at Trade Shows organized by this wholesaler for the summer holiday season.
At these events, besides the participation of the Convention and Visitors Bureau (CVB) of Riviera Nayarit, we had the attendance of Decameron, Hard Rock Hotel, Grand Velas, Marival Group, Paradise Village, Palladium, Occidental, Riu, Samba and Villagroup, which have properties on this destination.
“It’s very important to introduce the novelties and the advantages of vacationing in Riviera Nayarit in the Texas market, as ensures an influx of visitors during a season where travel from elsewhere in the United States and Canada drops considerably. Funjet is also the largest wholesale agency in that market, so we have created special strategies with them, like packages for the Texas Music Festival, which is held at this destination”, said Marc Murphy, Managing Director of the CVB of Riviera Nayarit.
The Convention and Visitors Bureau (CVB) of Riviera Nayarit is a non-profit association that operates under the direction of the Hotel and Motel Association of Bahía de Banderas in order to promote the Riviera Nayarit. Efforts like these promote the harmonious development of all the people of Nayarit, as instructed by the Governor for the People, Roberto Sandoval Castañeda.
https://www.rivieranayarit.com/wp-content/uploads/2019/07/logox300.jpg 0 0 Marc Murphy https://www.rivieranayarit.com/wp-content/uploads/2019/07/logox300.jpg Marc Murphy2013-04-23 08:54:002013-04-23 08:54:00Riviera Nayarit is seeking to attract the Texan market this summer