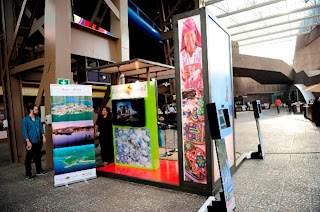 ·   The destination known as Mexico’s Pacific Treasure was at the latest Rod Stewart concert in Mexico City
While Rod Stewart was singing “Da ya Think I’m Sexy”, thousands of people were thinking about Riviera Nayarit, a destination where luxury ignites romance. Last August 16, Mexico’s Pacific Treasure setup a booth next to the doors of the National Auditorium, where the British singer performed.
The 9,565 people that attended this event received first hand information about the news in Riviera Nayarit, as part of the marketing strategies planned by the Convention and Visitors Bureau (CVB) of this destination, and the Council for the Promotion of Tourism in Mexico (CPTM).
These marketing efforts made by Riviera Nayarit are joining the efforts made by the State Government led by Roberto Sandoval in order to improve the life of all the people in Nayarit, by attracting visitors that allow us to reactivate the regional economy, and by linking the current production chains and generating employment for the local population.
Through marketing campaigns and strategies like promoting our brand at the Rod Stewart concert, we’re looking to influence the travel decision of potential visitors. The work in this area has already generated 55 marketing hits this year, in both national and international markets.
ESTIMATED MARKETING HITS
Between January and July 2012, our marketing strategy produced the following results:
15 million hits in Mexico
34 million hits in the United States
5.6 million impacts in Canada
300 thousands impacts in Latin America
https://www.rivieranayarit.com/wp-content/uploads/2019/07/logox300.jpg 0 0 Marc Murphy https://www.rivieranayarit.com/wp-content/uploads/2019/07/logox300.jpg Marc Murphy2012-09-17 09:54:002012-09-17 09:54:00Do you think Riviera Nayarit is sexy?