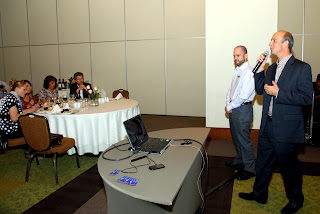 In Riviera Nayarit luxury is our magic, a magic which has enchanted the Media in Chile, where Mexico’s Pacific Treasure have recently concluded a work tour.

The natural attractions of this destination and the luxurious properties of the Riviera Nayarit have gained immediate echo in the country, when interviews and press conferences were given for more than 20 representatives of the Media.

“Many Chileans are seeking to visit a destination rather unexplored or unknown, away from the usual promotions,” stated a reporter form CNN Chile, before turning to discuss with some  specialists on such destinations, as she continued: “Have you heard of Mexico’s Pacific Treasure? Well, it’s called Riviera Nayarit, some 300 kilometers of beaches, luxury and beautiful scenery”. This description gives way to an interview with the director of the Convention and Visitors Bureau (CVB) of Riviera Nayarit, Marc Murphy.

“What we aim for is for the Chilean tourist to get to know this destination, which has a beautiful landscape, the best beaches, and all of the other forms of tourism such as ecotourism, sports tourism, cultural and businesses, “said Richard Zarkin, PR manager for Riviera Nayarit’s CVB,  in an interview published in Cybertour, a publication dedicated to Travel.

El Pulso paid attention to the new investments done in the region; El Mostrador published about the efforts done to position Riviera Nayarit in South America, and the Association of Journalists of Chile Tourism (APTUR) focused on the attractions the region has to offer for the tourist.

This significant response by the Chilean media, reflected in this publications and much more to come, is part of the efforts of the CVB of Riviera Nayarit, a civil non-profit organization that works under the direction of the Association Hotel and Motel Bay of Banderas to promote the Riviera Nayarit, demonstrating through actions like this promote the harmonious development of all Nayarit’s People.

“Riviera Nayarit, a new destination of ‘affordable luxury’, seeks to gain prominence in Mexico” was the headline on November 8th in Yahoo Argentina news site, following an article on Mexico’s Pacific Treasure after the CVB’s  participation in the International Tourism Fair of the Americas which was held in the capital city, Buenos Aires.