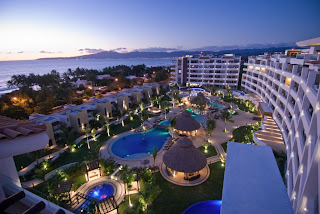 In Riviera Nayarit, luxury is our magic – the same magic that you selected at the beginning of 2012 through the popular Travelers’ Choice Awards, which are published every year by the specialized travel website TripAdvisor, based on the reviews and ratings provided by its users on properties around the world.
Marival Residences & World Spa, located in Nuevo Vallarta, was the best-ranking hotel in Riviera Nayarit, as it ranked second in the listing of the Best 25 All-Inclusive Hotels in the World, and of course, ranked #1 in the listing of All Inclusive Hotels in Mexico. Vallarta Palace, also located in Nuevo Vallarta, also was included in this list.
St. Regis Punta Mita took the first place among the top 25 Luxury Hotels in Mexico, and this listing also included Villa La Estancia in Flamingos, and Hotel Cinco in Punta de Mita. These three hotels also were listed among the top 25 Best Hotels with Spa in Mexico, a listing that also included Villa del Palmar Flamingos.
However, the real surprise came after three properties in Riviera Nayarit made it to the Top Five Hotels in Mexico: Taheíma Wellness Resort & Spa, which was ranked 3rd; Villa La Estancia, 4th, and St. Regis Punta Mita on 5th place. Four Seasons Punta Mita and Hotel Cinco also made it to the listing of the Top 25 Best Hotels in Mexico.
TripAdvisor is the leading and most reliable website for travelers worldwide. Its marketing strategy includes testimonials written by its consumers, and represents a factor that influences positively on travel decisions. Over 40 million travelers have written reviews and opinions about the products and services offered by this Website.
The Traveler’s Choice Award is based on the ratings, comments, and reviews published by tourists on this platform, and it therefore has a very high level of credibility.
The work done by the Convention and Visitors Bureau (CVB) of Riviera Nayarit and the members of the Hotel and Motel Association of Bahia de Banderas is evident through these awards, which are positioning our destination as one of the best worldwide and are an indicator of how important it is to improve the guests’ experience for hotels, restaurants, government officials, tourism service providers and for the society in general.
https://www.rivieranayarit.com/wp-content/uploads/2019/07/logox300.jpg 0 0 1stonthelist https://www.rivieranayarit.com/wp-content/uploads/2019/07/logox300.jpg 1stonthelist2012-02-02 11:48:002012-02-02 11:48:00Riviera Nayarit congratulates your favorite hotels

Riviera Nayarit grants 92 new certifications for travel agents In San Blas, the blessing of the water is a colorful and cheerful celebrati...
Scroll to top