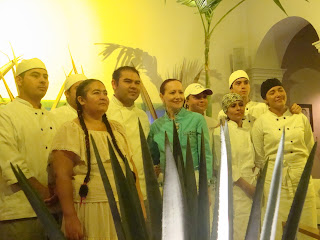 If you look closely, you can see that the image of Zapata that hangs at the entrance of Emiliano Restaurant in Tepic, licks his whiskers. So does the man who dressed as a revolutionary, thoughtfully sips his mug of beer while paying tribute to the valiant hero. However, this occasion is special because it is not driven by nostalgia, but by a comforting quelites soup.

Patricia Quintana, who was invited to this venue for the XVI edition of the Puerto Vallarta-Riviera Nayarit International Gourmet Festival, approached this man to talk with him. “He’s very special… he’s a shaman,” she said, adding that this visit was the perfect closure for a trip that was filled with emotion.

And it truly was for me, because having the opportunity of touring Riviera Nayarit with Quintana not only allowed me to infuse my memory with ancient flavors, but it also allowed me to enjoy the scenery and moments that, even though I can appreciate every day, rarely strike me so much. I’m really looking forward to the Puerto Vallarta-Riviera Nayarit International Gourmet Festival, which will take place next year.
WRAPPING UP THE ITACATE
As soon as I tried the first tablespoon of quelites, I felt right at home, and the first contact and I ever had with chef Quintana also came to mind: it was during a phone interview, listening to her almost poetic, soft-spoken voice, when she recounted her experience at a Cora community in the region of Jesus Maria del Nayar, where she not only learned a few of the secrets for the preparation of this magical plant, but also experienced the difficulties that the indigenous people endure to collect it.
“The integration with the women of the community took place gradually. At first they were very wary of me, but eventually they taught me the whole preparation process. It was very special both for them and for me; in the end they said “we knew you already, we’d seen you on TV”, and that was really surprising, Patricia said over the phone back then.
But this time we are in Tepic and I’m feeling tempted to lick the dish just like children do – even though the chef is sitting right in front of me. As I sit at the table with a group of journalists who are being introduced to the menu, Patricia Quintana explains why she chose bean tlacoyos, and pork rind gorditas as appetizers. “This is what the adelitas were carrying in their itacates”, Patricia says with emotion.
The appetizer parade is rounded up with goat tacos made from animals found by La Bola, and other tacos stuffed with minced shrimp, probably collected in the estuaries of the coast of Nayarit.
The task of wrapping up the itacate was a revelation in itself for this chef, and she accepted the invitation to Riviera Nayarit with one condition only: she wanted a to have an agenda full of activities to ensure she would experience traditional cuisine.
AN ENDLESS FEAST
David Reyes rubs his hands while chef Quintana presents a menu of thirteen dishes. The guest chef at the La Casona restaurant of Hotel Villa La Estancia, and host chef Eugenio Villafaña can’t conceal their nervousness as they present Patricia with the dishes they’ll offer during the International Gourmet Festival. There is another great chef on the board, Pedro Ortega, Executive Chef of Group Estoril, who was invited by Betty Vazquez at The Dolphin at Hotel Garza Canela in San Blas, and who will be the perfect partner for Quintana during the upcoming days of the tour.
The feast has just begun. Reyes stands out during this dinner by presenting a date stuffed with Tasso ham, wrapped in bacon, and covered with Harissa sauce. The opening ceremony will take place the following evening, where more than 30 chefs from different restaurants will welcome an equal number of guest chefs.
Ortega is as heartwarming as his food, and this becomes evident as soon as he walks in and we notice the humbleness with which he approaches chef Quintana while they tour the Salsa Huichol factory. Quintana and Ortega listen how 40 pesos were enough to create a legend and to give the world one of the essential ingredients for seafood dressings.
The Lopez family receives loving words from Ortega and praise from Patricia. I simply cannot stop going back to the cooks to fill my plate with ceviche, which of course, I immediately cover with salsa.
San Blas and La Tovara welcomed Paty with their natural beauty. This morning, the chef walked on the beach and promenade of Las Islitas, which set back breakfast for two hours, and Quintana was touched when she learned that the Huichol people go there every year to praise Haramara.
Mexcaltitán is not only the birthplace of the Mexican culture, but it’s also an endless source of gastronomic delights – the recipe of the “sarandeado” style fish originated here. The simplicity of its preparation hides most of its secrets: sea salt, perfumed wood embers, the natural fat of the red snapper with lemon juice, and the “vuelta y vuelta” style fish.
The trip to the island with Patricia Quintana still held more surprises. Besides the tlaxtihuil– a pre-Hispanic recipe consisting of shrimp broth thickened with corn and crab meatballs – the aguachile and shrimp came to the table with shrimp tortillas, which are the perfect pairing for coffee or used to serve one of the great cevichesthat are offered here. “Nowadays, only a few women can prepare them”, said Lilia Apodaca.
THE AWARD AND THE MORAL
At the end of the trip, the UNESCO recognized the traditional Mexican cuisine as an Intangible Cultural Heritage of Humanity. Quintana feels rejoiced, not because she has spent her life recovering ancient recipes, but because of the historic opportunity she has to encourage governments to rescue endangered recipes such as shrimp tortillas or quelites broth.
“We have to show the new generations that the most important thing is to go back to our roots, and we have great things to discover in this cuisine. We always evolve back to our roots. The ancient ones already made foam with chocolate, and we shouldn’t be using chemicals to create those textures – we only need to gaze back to the past”, she added.
I certainly agree. But today, with all these new memories, I wonder what’s in store for me this year. What novelties will we find in Riviera Nayarit as it gets ready to receive the Tianguis?
https://www.rivieranayarit.com/wp-content/uploads/2019/07/logox300.jpg 0 0 1stonthelist https://www.rivieranayarit.com/wp-content/uploads/2019/07/logox300.jpg 1stonthelist2011-09-28 09:36:002011-09-28 09:36:00The Revolution, the chef and an unforgettable destination: Riviera Nayarit