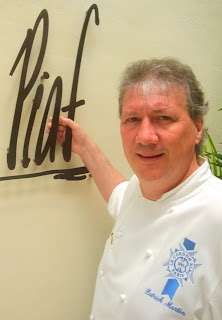 ·   Grand Velas Riviera Nayarit will host this famous french culinary academy June 16th to 26th
·   Cooking classes and the best of International Fusion Cuisine will be offered with the guidance of Patrick Martin, Le Cordon Bleu’s  Vice-President of Culinary Education
Famous French culinary academy Le Cordon Bleu is back to Grand Velas Riviera Nayarit presenting the best of International Fusion Cuisine, this June 16th to 26th, with guest chefs Patrick Martin, Olivier Bué, Olivier Calvez y Miguel Quezada.
During this festival invited chefs will create an special menu at Piaf Restaurant with no extra cost for Grand Velas Riviera Nayarit guests but also open to all public, besides cooking classes will be offered.
Riviera Nayarit is a destination distinguished by its gastronomy, not only because international cuisine has been given great impulse now days, thanks to the establishment of highend hotels like Grand Velas, but because the strong influence of European and Asiatic flavors  that’s been received on the region since the Spanish Colony.
A truly tasteful experience is the promise to the Gastronomic Festival Le Cordon Bleu. Patrick Martin, Le Cordon Bleu’s  Vice-President of Culinary Education, has created this astonishing menu together with other guest chefs.
Surprises could include true Mexican touches since Martin, despite being responsible for the opening of Le Cordon Bleu’s schools in over 40 different countries around the world, is been for the last ten years a permanent  Mexican resident. “I’m half French, half Mexican now”, he uses to say.
But for him a very important part of the festival is the cooking classes, since education is the main porpoise of Le Cordon Bleu. The guest chefs will present three dishes –entrance, main course and desert— on a demonstration and will share recipes and secrets of the culinary technique afterwards.
Exclusive events like this make Riviera Nayarit a leader destination when it comes to Best Eat and gourmet experience, an important tourism attraction on a region where every day new high quality restaurants open every day.
The Riviera Nayarit’s  Conventions and Visitors Bureau (CBV) congratulates Grand Velas resort for the great promotional efforts to attract high end tourism to the destination with events like to the Gastronomic Festival Le Cordon Bleu.
BE THE COOK
Learn and practice exclusive recipes from renowned chefs of Le Cordon Bleu’s Culinary Academy:
Saturday 18th,  Sunday 19th, Tuesday 21st , Thurday 23rd , Saturday 25th  and Sunday 26th
Class duration: 3 hours.
Schedule: 12:00 – 15:00
Price: 750 pesos per person includes taxes.
Limited seats. Sunni, another Cheer up from sunny Riviera Nayarit!

PMGG Is The Top Event Of Its Kind In Mexico The Riviera Nayarit keeps its beaches safe and clean