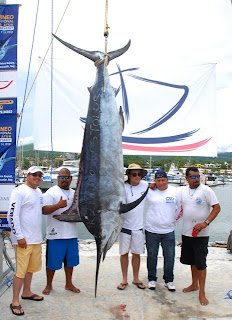 ·   The International Tuna and Marlin Fishing Tournament of Bahia de Banderas Riviera Nayarit is offering over one million pesos in prizes
Sport fishing fans are preparing their best strategies to grasp one of the prizes offered by the International Tuna and Marlin Fishing Tournament of Bahia de Banderas Riviera Nayarit, which will take place at Riviera Nayarit at La Cruz de Huanacaxtle on July 14 to 16.
The Bahia de Banderas Fishing Club recently disclosed the details of the tournament, which will offer prizes for the largest marlin and tuna, as well as for the largest number of fish caught in a “catch and release” mode and a “fish in one” for the first marlin that breaks the current tournament’s record of 322 kilograms.
There are millions of pesos in prizes, including four new cars, a 4-stroke 60 HP off board motor, professional fishing gear, free hotel stays, cash, and much more. Furthermore, the registration cost for teams of up to four competitors has been reduced.
In addition to the prizes for the four different categories, competitors will be able to participate in the daily stakes of the largest catch of the day, and earn cash prizes of $1000 USD per day and per team in the marlin category, $500 in the tuna category and $500 in the dorado category.
The event will begin next July 14 at the El Marlin restaurant. Participants will be able to register until 9:00 PM, and the day will close with the now traditional welcome cocktail and the captain’s gathering.
On Friday 15 at 7:00 am in Marina Riviera Nayarit at La Cruz de Huanacaxtle there will be a flag ceremony, followed by an inauguration ceremony that will officially kick-start the tournament, with all the teams and vessels departing at 7:15 am.
Teams will unload their catch of the day from 1:00 pm to 6:00 pm on the first day, and from 2:00 pm to 5:00 pm on the second. This show will be open to the public, and the tournament will become a true party. The awards ceremony will take place on Sunday at 6:30 pm at Sky, at the La Cruz Yacht Club.
Riviera Nayarit is one of the most important fishing destinations in the world, as it offers great fishing year-round and several kinds of fish like wahoo, sailfish, dolphin-fish, tuna, three different species of marlin, sawfish, and snapper, among many others.
Additionally, our destination offers world-class marinas, fiberglass specialists, and technicians that can fix all the gadgets found on a ship, as well as incredible restaurants, luxurious hotels and the complete infrastructure that this sport demands.
ANGLERS, GET READY
5th International Tuna and Marlin Fishing Tournament of Bahia de Banderas Riviera Nayarit
July 14 – 16
Registration fee: $20,000 pesos (until June 30), and $22,000 pesos (July 1 – 14).
Four members per team.
For further information, contact: info@fishingnayarit.com
https://www.rivieranayarit.com/wp-content/uploads/2019/07/logox300.jpg 0 0 1stonthelist https://www.rivieranayarit.com/wp-content/uploads/2019/07/logox300.jpg 1stonthelist2011-07-04 09:13:002011-07-04 09:13:00Million-peso fish is at Riviera Nayarit