And the good news keeps on coming for the Riviera Nayarit! After years of negotiations the destination finally has its own home page in the 2019 Forbes Travel Guide, the most important travel and tourism site in North America.
“This is proof positive of the importance of public relations, the relationship the CVB maintains with the international media, and our own office’s intense promotional efforts,” said Marc Murphy, managing director of the Riviera Nayarit Convention and Visitors Bureau and the Bahía de Banderas Hotel and Motel Association.
Richard Zarkin, public relations manager for the CVB, reiterated all this can be summed up in one word: persistence. “We’re very proud of the fact the Riviera Nayarit has its own home page in the Forbes Travel Guide; this is the result of all the work we’ve done day in and day out to position the Riviera Nayarit among the top destinations in the world—work that has been complemented by Newlink, our public relations and communications agency in North America.”
Zarkin also mentioned the recent media tour he led in the United States in August of 2018, where he met with Jennifer Kester, executive editor for the Forbes Travel Guide. He spoke to her about a home page for the Riviera Nayarit—six months later, it’s a reality.
The page has several articles on it related to the destination, its hotels, and its spas, as well as interviews with different public figures and reports of relevant events.

2019 Star Awards for the Riviera Nayarit
Of note is the fact three of the Riviera Nayarit’s hotels and one of its spas were among the winners for the 2019 Forbes Star Awards. These are: Grand Velas Riviera Nayarit with four stars; Seasons Resort Punta Mita y The St. Regis Punta Mita Resort with five stars; and the Spa at the Grand Velas Riviera Nayarit with four stars.
The grading scale emphasizes courtesy, consideration, and personalized service: 75 percent of the hotel’s rating is based on its level of service, while the remaining 25 percent is determined by the quality of its facilities.
Click below to take a look:
https://www.forbestravelguide.com/destinations/riviera-nayarit/travel-guide
https://www.forbestravelguide.com/award-winners 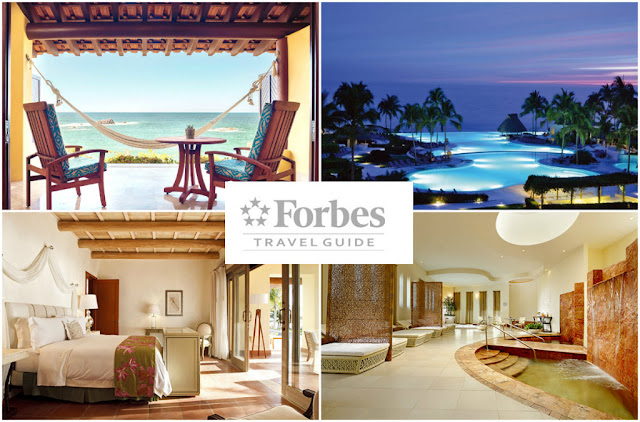 ABOUT FORBES
According to information published on www.forbestravelguide.com, the Forbes Travel Guide is a global authority on luxury travel that publishes reviews, recommendations, and content based on the destinations it visits. A team of anonymous professional inspectors travel the world to evaluate hotels, restaurants, and spas based on 900 objective standards. They emphasize quality of service for tourists because the “experience at a hotel, restaurant, or spa goes beyond looks.”
###
The work of the Riviera Nayarit Convention and Visitors Bureau (CVB) and the Bahía de Banderas Hotel and Motel Association (AHMBB) is reflected in recognitions such as the 2019 Forbes Travel Guide Star Awards, which position the destination as one of the best on a global scale; this is accomplished with the support of the Government of the State of Nayarit via its Tourism Promotional Trust (Fiprotur).
https://www.rivieranayarit.com/wp-content/uploads/2019/07/logox300.jpg 0 0 1stonthelist https://www.rivieranayarit.com/wp-content/uploads/2019/07/logox300.jpg 1stonthelist2019-02-26 06:20:002019-02-26 06:20:00Riviera Nayarit makes waves in the 2019 Forbes Travel Guide

The Riviera Nayarit strengthens its brand in Mexico City

Riviera Nayarit is more affordable than ever

Music, Celebrities, and Plenty of Glamour at the 2018 Riviera Summer Weekend
0 replies