Chef Betty Vázquez, the Riviera Nayarit’sCulinary Ambassador, is ending the year on a happy note and is ready to take on new challenges. Two thousand eighteen proved to be very busy and very productive: she participated in over 35 events helping to raise the traditional cuisine of Nayarit to new heights.
There’s no doubt Betty Vázquez is one of Mexico’s most brilliant chefs, a proponent of cuisine that makes hearts swoon, developed with local techniques and traditional flavors with seafood as the main protagonist. “The sea is the future of our world,” she says whenever she gets a chance.
Institutions have acclaimed her creations in Mexico and around the world, and she has participated successfully in festivals, conferences, and seminars. She’s also been invited to different countries and festivals worldwide to represent Mexican cuisine.
Uttering the colloquial phrase, “siguen cayendo peras de mi olmo,” an expression that roughly translated means “the impossible continues to happen,” chef Vázquez looks back at a successful, exciting, and gratifying year for having secured gastronomy within the cultural segment. 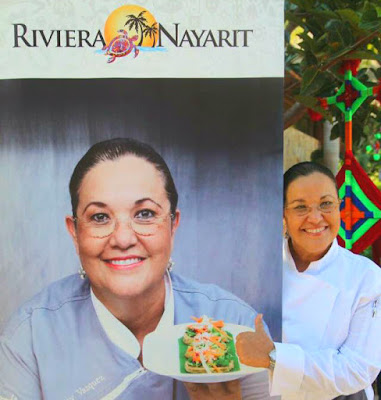 12 productive months
Chef Vázquez busy year began in January at Spain’s International Tourism Fair (Fitur), where she shared space with Mexico’s Secretary of Tourism and other top personalities of on the world tourism stage.
“As the cook who opened Fitur, offering the flavors of Nayarit to the world at the most important tourism fair in Spain was a great honor,” commented Betty Vázquez. “I was able to greet the Secretary of Tourism and the entire week very exciting, especially because I later cooked again in Madrid for the media and my friends.” 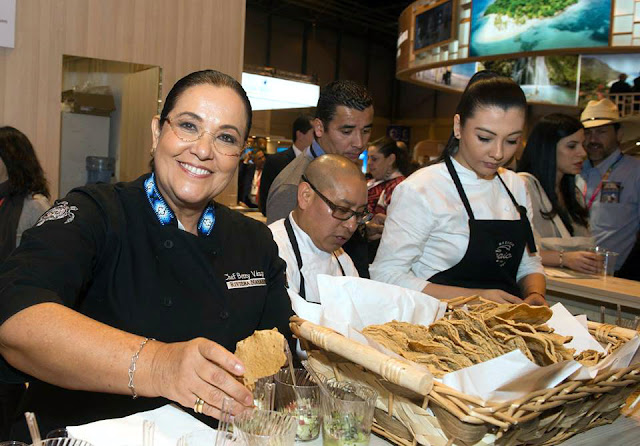 In February she hosted a Facebook Live event for Salsa Huichol, reaching 900,000 views in just one week. “Social media reach is amazing. Just seeing how Nayarit’s best local brand —the salsa Huichol—got activated was incredible.”
That same month marked the first time La Cantina eatery at the Palacio de Hierro department stores in Perisur and Polanco (Mexico City) opened its doors to guest chefs, and Betty was the first of a group of six. “We presented the menu to the national press and kept it throughout March; because it was Lent the menu focused on seafood and the flavors of the Riviera Nayarit,” she said. 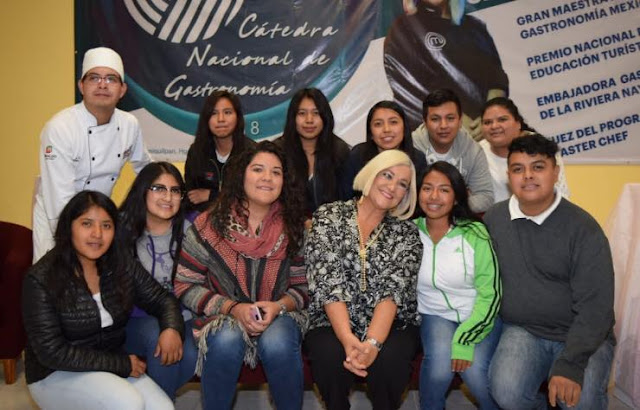 Spring arrived in March and with it, new opportunities for the chef, as she was named ambassador for Senkalli, a brand of corn products from Nayarit. The company produced four videos and a photo album of Nayarit’s cuisine. The 2018 Amestur National Gastronomy lectures also began in March at the University of Guadalajara’s CUCEA.
“When Amestur gave me the National Tourism Award I committed to giving lectures in different universities around the country; this year I visited six different universities in different states around the Mexican Republic,” she said. “I was also consulting at the University of Guadalajara’s Gastronomy and Business Management school, even though I wasn’t a professor there.” 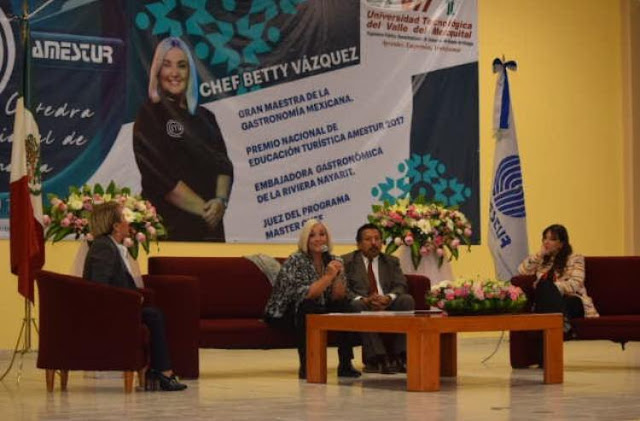 April meant the Mini Master Chef and the 2018 Cuisine of the Sun Festival at Villa La Estancia Rivira Nayarit. In May, Betty traveled to Pachuca to celebrate the second anniversary of chef Aquiles Chávez’ Sotero restaurant. She also participated in the first Bergner Group contest in Panamá alongside Rolando González. Afterward, she traveled to Riviera Maya to participate in the Culinary Festival with chef Taltlekiti Rivera Pérez, as well as to offer the second Amestur Lecture at Izamal, Yucatan, plus a culinary conference at Oriente University in Valladolid, Yucatan.
June and July were very busy with the launch of the sixth season of Master Chef Mexico, a reality cooking show with an audience of 15 million domestically and 60 million internationally. August and September weren’t far behind. She participated in Abastur, Mexico’s top food provider trade fair, in representation of the L’Bistrot brand; held a training session at La Hacienda San Lorenzo, home of the Casa Madero wines; offered a third Amesture Lecture in Guaymas, Sonora; and prepared the anniversary dinner for the Four Season Mexico City’s Zanaya restaurant with a menu highlighting dishes from Nayarit. 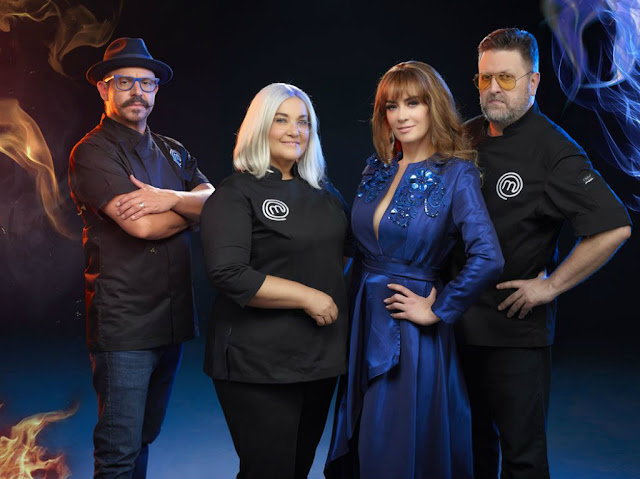 In October Betty was invited to the annual Guadalajara Wine Brotherhood dinner, and in Puerto Vallarta, she was a guest and speaker at the 10th anniversary of Vallarta Nayarit Gastronómica. Afterward, she flew to Guadalajara to give a lecture on gastronomy and tourism with Ramón de Dios for professionals in this field. Ramón de Dios is a restaurateur from Madrid who was president of the Young Restaurateurs of Europe for six years.
Towards the end of the year in November, Betty Vázquez participated the Convite Congress in Campeche, as well as the 4th, 5th, and 6th Amestur National Tourism Lectures that took place in Mexico City; the Mezquital Valley, Hidalgo; and the Huasteca Potosina, respectively. The latter marked the end of the lecture circuit and the start of a new challenge for 2019. May of next year will be the 10th anniversary for Mexican student mobility to France. To date, 1200 youths have traveled to this European country for four-month internships; they return fluent in French and with new insight into tourism. 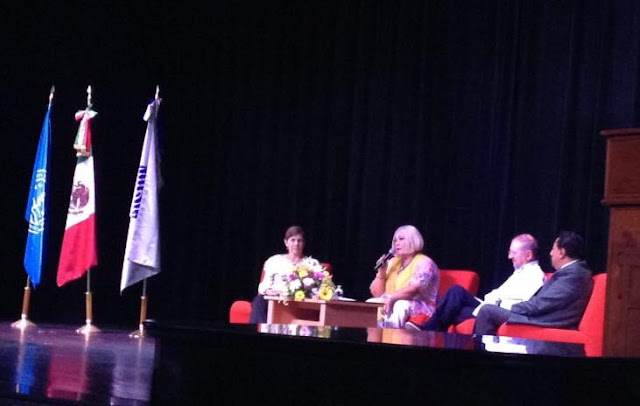 Last but not least, Chef Betty was invited to the Punta Mita Gourmet & Golf Classic, a meeting of golfers and gourmands held in December, followed by a trip to Yucatan to share the flavors of Nayarit, where she participated in the 28th-anniversary celebration of La Tradición.
Among the tasks that are in store for Betty in 2019 is a scholarship she received to spend 15 days in France in June to study the country’s Family Tourism Vacations system that was implemented after the war to encourage internal tourism.
“I’m grateful for the work we’ve done with the Riviera Nayarit Convention and Visitors Bureau and the follow-up to all the activities I’ve participated in,” added Betty. “I’m especially grateful to all the media for the many articles published about me, my destination, and my region.”
###
The Riviera Nayarit Convention and Visitors Bureau (CVB) and the Bahía de Banderas Hotel and Motel Association (AHMBB) are hard at work in the promotion of the destination with the support of the Government of the State of Nayarit via its Tourism Promotional Trust (Fiprotur).
https://www.rivieranayarit.com/wp-content/uploads/2019/07/logox300.jpg 0 0 1stonthelist https://www.rivieranayarit.com/wp-content/uploads/2019/07/logox300.jpg 1stonthelist2018-12-13 17:07:002018-12-13 17:07:00Chef Betty Vázquez shares the Riviera Nayarit’s “flavors of the sea” with the rest of the world

The Riviera Nayarit Sails Into 2016

The Riviera Nayarit Keeps its Beaches Safe and Clean for Vacationers

Need a venue in Riviera Nayarit during Tianguis Turistico?

SEE IT TO BELIEVE IT IN THE RIVIERA NAYARIT: The much-anticipated visit of the... Chilly? Come to the Riviera Nayarit and warm up with these Winter Promos!
Scroll to top