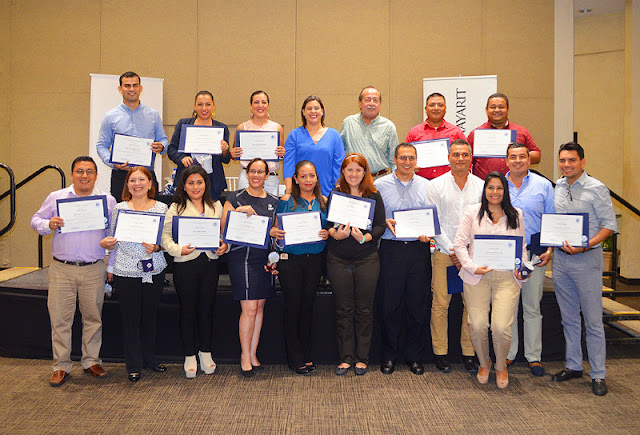 Over twenty people who work with the Riviera Nayarit hotels satisfactorily completed the Management Development and Decision Making Certification Program held over the past eight months under the guidance of instructors from the ITESO Jesuit University.
This is part of the commitment the Bahia de Banderas Hotel and Motel Association (AHMBB) has with its associates in coordination with the Partner Services and Tourism Development Programs desk of the Riviera Nayarit Convention and Visitors Bureau, via its Safety and Human Resources committees.
Twenty-one managers and assistant managers received their diplomas during an event held on Saturday, October 7 at the Villa del Palmar Flamingos hotel. Each of them had satisfactorily finished the seven modules in the Certification Program, which was held Fridays and Saturdays from March through October of 2017.
During those eight months the group covered different topics including: Systematic Vision and Strategic Thinking; Emotional Intelligence; Self-Diagnosis and Recognition; Managing Stress, Communication and the Brain as a Basis for Decision-Making; Negotiation and Conflict Resolution and Teamwork; Leadership and the Development of Human Capital; and Human Behavior Analysis Techniques.
Jesus Carmona, Vice President of the AHMBB, spoke on behalf of the hotel union and congratulated the group of graduates for having reached such an important goal in their personal trajectories, which reflects their wish for personal advancement and the improvement of their abilities in order to offer a better service to the tourist.
“One of the topics we’ve espoused in the Hotel Association is training on all levels in order to improve the hotel sector, offer better service to our visitors and maintain the different departments on a good level. Until now we’ve had a very positive response on behalf of the hotels and the personnel they’ve sent in.
“We know we still have a lot of work ahead of us, it’s never-ending; there’s a lot of competition out there and we have to be at a very good level. However, the human factor has a lot to do with it and I can assert that the one we have in this region is top notch,” he said. 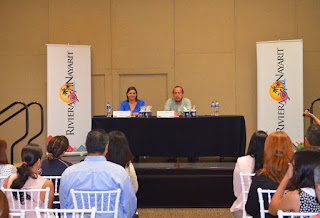 Open Invitation to the XVI Oyster Festival in Bucerías