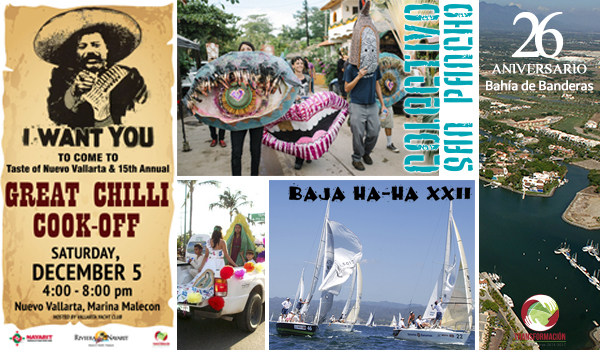 The Groups and Events department of the Riviera Nayarit Convention and Visitors Bureau (CVB) organizes more than 70 events throughout the year in order to diversify the Destination’s offerings. December is no exception; read on for some of the coolest events around to bid farewell to the closing year.
Feast of Our Lady of Guadalupe (December 1 – 12)
Our Lady of Guadalupe is the patron saint of Mexico and every one of the Riviera Nayarit’s microdestinations venerates the Virgen Morena from the start of the month through December 12th, her birthday. Those days the coastal villages of Nayarit are brimming with joy and celebrating with pilgrimages, traditional religious festivities and popular verbenas.
3rd Taste of Nuevo Vallarta and 15th Chili Cook-Off (December 5)
These two events take place in the Vallarta Yacht Club in Nuevo Vallarta, both showcasing the culinary pleasures of the Riviera Nayarit. On Saturday, December 5th in the afternoon attendees will be able to sample all kinds of dishes and cooking styles. Both events are fundraisers for the Families of the Dump charity.
26th Anniversary of Banderas Bay (December 11)
Banderas Bay celebrates its founding as a municipality with all kinds of events civic, sports, artistic and cultural to commemorate the history of this beautiful seaside town in the Riviera Nayarit.
XXII Baja Ha-Ha / 4th Sailors’ Splash (December 11)
For the fourth year in a row the Destination will host the Riviera Nayarit Sailors’ Splash 2015, a nautical rally that coincidentally takes place on the XXII anniversary of the Baja Ha-Ha. Between 120 and 150 boats will be arriving at the Marina Riviera Nayarit in La Cruz de Huanacaxtle for this impressive show of sails.
10th Sinergiarte Festival (December 12-20)

The Colectivo San Pancho organizes this grand artistic and cultural festival around a theme that changes from year to year. During its 10th anniversary the topic is the “Multicultural Community.” Come enjoy this Cultural Week filled with activities starting on December 12th and ending with stage shows on the 18th, 19thand 20th of the month.

Riviera Nayarit is more affordable than ever

Can you guess where in Riviera Nayarit is this place?

Three Riviera Nayarit hotels, among the 20 favorites of Travesias

Gastronomy, A Gateway To Tourism