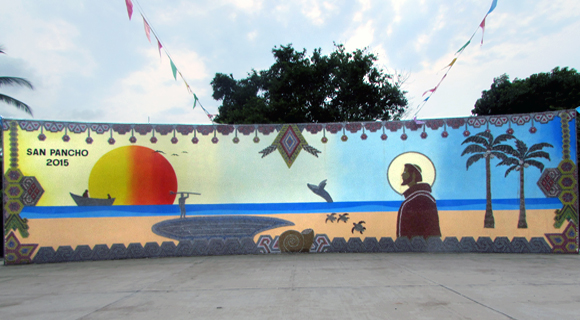 A year ago a new art form was born in San Pancho’s Plaza del Sol: a mural made from recycled bottle caps that followed the numbered patterns from ancient Huichol bead art. This year, the creation was redone and we’re here to give you the scoop.
Ramiro González was the artist who came up with this unique idea, which has gone on to be copied in other towns such as Sayulita and San Blas. It has become another attraction among the many the Riviera Nayarit has to offer, thanks to its combination of recycling and creativity, as well as its representation of each of the villages.
According to Ramiro himself, “this second mural takes a closer look at a typical day in San Pancho, what with the surfing, the fishing, the estuary, the turtle releases, our patron Saint Francis of Assisi and the typical elements of the beach.”
Ramiro González directed the creation of the mural with the coordination of Abraham Vivas and José Castellanos, as well as the support of Miguel Vallajan’s painting and Mathias’ digital design.
The redesign work began back on Monday, September 21, 2015 and ended on Saturday, September 26th. The townspeople also helped in the creation of the mural by separating the bottle caps and gluing them on; they also donated materials.
“The creation of this mural was an exercise in community effort and mutual cooperation,” explained Ramiro González.
This kind of artistic and cultural innovation serves to corroborate San Pancho’s title as the Cultural Capital of the Riviera Nayarit.
https://www.rivieranayarit.com/wp-content/uploads/2019/07/logox300.jpg 0 0 Marc Murphy https://www.rivieranayarit.com/wp-content/uploads/2019/07/logox300.jpg Marc Murphy2015-10-22 11:07:002015-10-22 11:07:00San Pancho’s New Bottle Cap Mural
0 replies