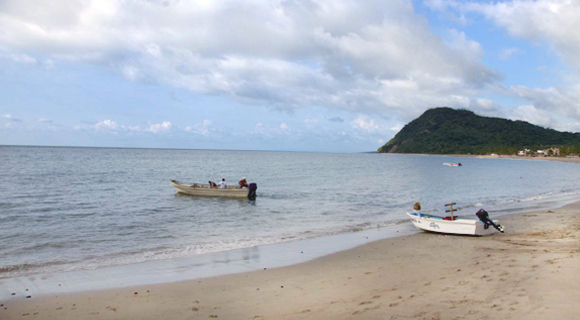 Lo de Marcos is charming little town located on the Pacific Coast between El Monteón and San Pancho with a special allure that’s due in large part to its laidback calm. Keep reading to learn a bit more of the attractions of one of the Riviera Nayarit’s most Picturesque Villages.
The Lo de Marcos Turtle Camp
Now in its second year of operation, the Lo de Marcos Turtle Camp has become part of the Red Tortuguera (Turtle Network) in order to join these volunteers who put their love of nature to work towards conserving the Riviera Nayarit as a Sea Turtle Sanctuary. Bring your family and come enjoy a baby turtle release for yourself!
Explore México Surf Shop
Surf and Stand Up Paddle are a huge part of what goes on here. The Explore México Surf Shop is a store were you can find everything you need to indulge in these sports, plus the opportunity to learn from National SUP Mexico Team member, Oliver Cruz, a native of Lo de Marcos. There are those who think there aren’t any waves in Lo de Marcos, but in the summertime you’ll find them reaching nearly two meters in height, and in the winter they can reach almost four meters!
Maktub Yoga Studio
If you’re into chilling and relaxing you’ll want to visit the Maktub Yoga Studio, which means “destiny or that which is written,” where teacher Gaby Abnashi gives classes in-studio as well as Paddle Yoga on the water for those seeking an even higher connection.
The Lo de Marcos Tianguis
You’ll find over 45 talented artists and vendors of organic products in this artisanal tianguis (marketplace) every morning from November through March on Luis Echeverría street. For more details click https://www.facebook.com/LoDeMarcosTianguis.
The gastronomy is exquisite!
As in every Mexican village you’ll find tacos and antojitos (treats) galore, but if you’re looking for something different you’ll find a menu with a minimalist gourmet slant at the Secrets Restaurant. Here’s our recommendation: tuna carpaccio as an appetizer, followed by a beet salad with jocoque (strained yoghurt) and arugula served with a balsamic vinegar reduction, then a plate of tequila- or coconut-shrimp served, of course, with a glass of wine. For dessert, a slice of cold lemon pie served with a piece of seasonal fruit.
Guaranteed eco-adventures
Lo de Marcos is ready for anything! You’ll find tons of adventure here, including scuba diving in El Bajo and Las Minias, where there’s an incredible variety of marine life. You can also visit the popular Islas del Coral and Islas Marietas on a tour from the town. It’s also an ideal spot for surf fishing. Oh, and the townspeople say that even though the service isn’t being offered yet, you’ll soon be able to go hang gliding from peak of Don Laureano—those who’ve already tried it say they’ve been in the air for at least half an hour!
As far as where to stay: don’t worry. Lo de Marcos has great small hotels such as El Coral, villas and plenty of wide open, clean beaches for you to camp on—no problem!
https://www.rivieranayarit.com/wp-content/uploads/2019/07/logox300.jpg 0 0 Marc Murphy https://www.rivieranayarit.com/wp-content/uploads/2019/07/logox300.jpg Marc Murphy2015-10-22 11:00:002015-10-22 11:00:00The Charming Village Of Lo De Marcos