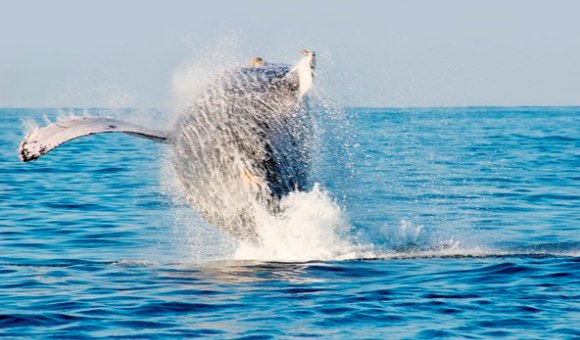 The Riviera Nayarit is a unique tourism destination where Mother Nature is displayed at her very best. Whether it’s in the mountains or in its rivers, lagoons, estuaries or oceans, you’re sure to encounter amazing animals enjoying their natural habitat. Come and experience it all for yourself!
The Sea Turtle
The Riviera Nayarit offers over 300 kilometers of coastline for its visitors—and that includes the Sea Turtle, which comes to nest here from June through February. Every year, hundreds of thousands of hatchlings are liberated from the Turtle Camps distributed throughout the Destination’s five coastal towns. The Olive Ridley Turtle is the most common, but Hawksbill, Leatherback and Black turtles also put in appearances.
The Humpback Whale
Every year from November through April the Riviera Nayarit welcomes the majestic Humpback Whales. They choose the warm waters of the southern reaches of the state for their mating rituals giving visitors a show they can’t see anywhere else in the world. Once the calves are old enough to travel, the Whales return to the cooler waters of the northern part of the continent.
Endemic and Migratory Birds
The Nayarit National Marshlands located between San Blas and Rosamorada are the favorite haunt of the Migratory Birds that fly in from North America and comingle with the many Resident and Endemic Species. There are approximately 500 different species that can be viewed in this area; the southern region of the state is also home to birds that range from the tiny flycatchers to the imposing birds of prey.
The Whale Shark
The word “shark” alone is enough to scare people, however, the Whale Shark is one of the friendliest marine species. In San Blas you can even swim next to one, usually during the winter season.
The Jaguar
The Jaguar rules the Sierra del Vallejo and is at the top of the food chain in the Riviera Nayarit, its ancestral home. Even though working with this feline is a dangerous and complicated business, the Jaguar Alliance (located in San Pancho) offers visitors a place to learn more about the conservation of this species.
Giant Rays, Dolphins and Other Marine Species
The diversity of the marine species in the Riviera Nayarit is huge. Here you’ll find everything from Giant Rays, which swim and dine in the rich waters of Banderas Bay, to Dolphins enjoying the same habitat. Sport fishing is a year round pursuit in this area thanks to the many species available.
https://www.rivieranayarit.com/wp-content/uploads/2019/07/logox300.jpg 0 0 Marc Murphy https://www.rivieranayarit.com/wp-content/uploads/2019/07/logox300.jpg Marc Murphy2015-07-16 09:40:002015-07-16 09:40:00The Wildlife Of The Riviera Nayarit
0 replies