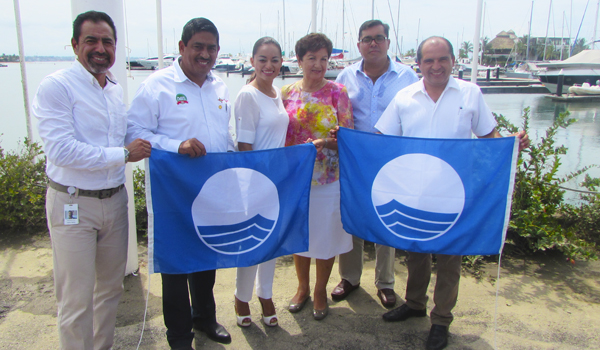 The Blue Flag was raised for the first time ever over a Mexican marina on July 14, 2015. The event occurred after the official award of this recognition to the Marina Riviera Nayarit in La Cruz de Huanacaxtle and to the beach at Nuevo Vallarta Norte.
The beaches at Chacala, Bucerías, Nuevo Vallarta Sur and Nuevo Vallarta Norte also received their Clean Beach Certificates under the Official Mexican Regulation Nom-120-Semarnat at the same event.
The presiding members included the heads of the Tourism and Environmental offices of Nayarit, Catalina Ruiz and Adahan Casas, respectively; Alicia Monroy and José Gómez, mayors of Compostela and Banderas Bay, in that order; Rafael Alcántara, Harbor Master of the Marina Riviera Nayarit; and Joaquín Díaz, national coordinator for the Blue Flag and Green Key programs.
The municipal and state authorities in collaboration with the Federal authorities as well as the citizenship and private initiative all committed to contributing towards adding on new beaches to these programs.
“We’re exploring the opportunity for Compostela to obtain a Blue Flag. We’ll be performing that inspection in August when we tour several beaches to see which one or which ones will receive the Blue Flag,” said Joaquín Díaz. “Both Compostela and San Blas have a high potential for certification.”
The Tourism Secretary also announced they were seeking Green Key recognitions for Destination hotels, which like the Blue Flag are awarded by Pronatura A.C. Both certifications are of great international import.
https://www.rivieranayarit.com/wp-content/uploads/2019/07/logox300.jpg 0 0 1stonthelist https://www.rivieranayarit.com/wp-content/uploads/2019/07/logox300.jpg 1stonthelist2015-07-16 06:00:002015-07-16 06:00:00Blue Flag Goes Up In The Marina Riviera Nayarit US Influencer Promotes The Riviera Nayarit