Mexico City Falls In Love With The Riviera Nayarit’s Culinary Prowess
*According to a poll conducted by the Riviera Nayarit Convention and Visitors Bureau during the first semester of 2013, gastronomy is second on the list of Mexican visitors’ favorite attractions during their stay in the Riviera Nayarit.
As part of their promotional efforts for the XIX Gourmet Festival set to take place in Puerto Vallarta, Riviera Nayarit and Tepic, the Riviera Nayarit Convention and Visitors Bureau held a press conference for over 20 representatives of Mexico City’s top culinary and tourism media, who promptly fell head over heels for the Riviera’s cuisine.
Hosted by the Estoril Restaurant in Mexico City this past October 15th, the participants enjoyed a menu created and prepared by Betty Vázquez, who was recently named Chef Ambassador for the Riviera Nayarit’s gastronomy and has been recognized by the Federal Government’s Foreign Ministry as one of the top in her class in the country.
Renowned chef and founder of the Estoril Group, Pedro Ortega, hosted the event. Details of the prestigious festival were also announced, while the region’s gastronomy—which has become a magnet for tourists—was amply promoted. 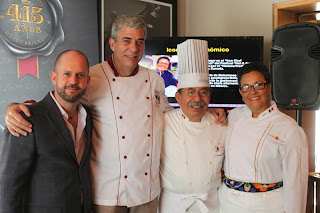 There’s plenty of data to back up this claim. According to a poll conducted by the Riviera Nayarit Convention and Visitors Bureau during the first semester of 2013, the region’s gastronomy was second only to the sun and sand activities on the list of favorite attractions for Mexican travelers who visited the area.
The managers of the Riviera Nayarit Convention and Visitors Bureau highlighted the importance of gastronomy as one of the attractions shared by the Vallarta-Nayarit region, which they are proud to present to the world.
“With events such as this, which was very cost-effective compared to the media reach we generated, the Riviera Nayarit Convention and Visitors Bureau sends out a strong signal that it is fully committed to achieve the objectives laid out by Roberto Sandoval, the People’s Governor, to attract tourism that benefits everyone in Nayarit,” said Managing Director Marc Murphy.
Among the media attending the event were Food & Travel magazine, which is also promoted on Acir 88.9 FM throughout Mexico; Gourmet.com, a tourism and culinary website; Rubén Hernández, one of the gourmet press’ top journalists who writes for 24 Horas newspaper; and the tourism segment representatives from El Financiero and El Economista, two well-known papers that specialize in business and finance.
The XIX International Gourmet Festival will take place during the upcoming month of November. As with every year, it will host a group of very prestigious chefs from around the world.
This Gourmet Festival highlights Mexico’s culinary prowess, which has been well represented in large part by its restaurants. It’s an honor to invite the people of Mexico and the rest of the world to come visit our destinations and experience the best of our culinary tourism along with all of the many attractions we have to offer.
https://www.rivieranayarit.com/wp-content/uploads/2019/07/logox300.jpg 0 0 1stonthelist https://www.rivieranayarit.com/wp-content/uploads/2019/07/logox300.jpg 1stonthelist2013-10-21 06:00:002013-10-21 06:00:00MEXICO CITY FALLS IN LOVE WITH THE RIVIERAS NAYARIT'S CULINARY PROWESS

GASTRONOMY: THE DRIVING FORCE BEHIND THE REVIVAL OF INTERNATIONAL TOURISM O GLOBO OF BRAZIL PRAISES RIVIERA NAYARIT
Scroll to top