O Globo of Brazil praises Riviera Nayarit
·        One of the most important Brazilian newspapers. It publishes more than 348.880 copies daily and it also broadcasts radio and television.
The Brazilian newspaper O Globo deluged with praises its tabloids publishing several articles on the wonders of Riviera Nayarit. This is one of the tangible results of the promotion efforts of the Conventions and Visitors Bureau of Riviera Nayarit (CVB).
“Surfe, luxo e boa gastronomía na Riviera Nayarit… A muy buena onda do litoral pacífico”, was one of the titles published by Henrique Gomes Batista published last October 10.  Gomes, was one of the six journalists who were invited last month to promote Riviera Nayarit in the South American market.
Among the published articles, besides admiring the natural beaches, luxury and cuisine of the area, a space was dedicated to architecture and ancient culture of the region, showing interest in promoting one of the elements that the Government of the People, led by Roberto Sandoval, has pointed out as essential to improve tourism development in the destination.
“It is highly beneficial that Brazil is interested in that other tourist sector that represents the ancient culture of the peoples of Riviera Nayarit. It is a market that likes luxury and also appreciates the cultural aspect”, said the General Director of the CVB of Riviera Nayarit, Marc Murphy.
Brazil is the largest Latin American market in luxury goods sales, which fluctuate the 2.3 billion dollars. However, its growth per year is 35% in the sector, according MCF FASHION, Brazilian consultant for High Luxury products . 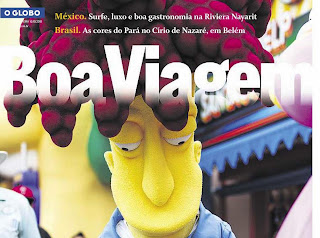 The Brazilian newspaper created in the mid-20’s of last century, is one of the most important of Amazonian country, since more than 348.880 copies are published daily. What’s more, it also broadcasts on radio and television. Here the link to view the full notes: http://www.clippingspbrasil.com.br/copa/vercopa.asp?linkimagem=6291
https://www.rivieranayarit.com/wp-content/uploads/2019/07/logox300.jpg 0 0 1stonthelist https://www.rivieranayarit.com/wp-content/uploads/2019/07/logox300.jpg 1stonthelist2013-10-22 06:00:002013-10-22 06:00:00O GLOBO OF BRAZIL PRAISES RIVIERA NAYARIT

THE III PUNTA MITA GOURMET & GOLF CLASSIC TO TAKE PLACE IN RIVIERA NAYARIT, APRIL 11 – 14
Southwest Airlines Announces New Flights To The Destination
National Windsurf Championship to heat up Pan Am spirit at Riviera Nayarit
Joint Promotional Campaign Makes A Stop In Texas
Riviera Nayarit, where whales leave a trail
Riviera Nayarit gets in contact with almost 600 travel agents through a promotional tour
2nd Sea Turtle Festival at Playa Platanitos
US Team goes back to the first place at Pan Am sailing regata in Riviera Nayarit
0 replies