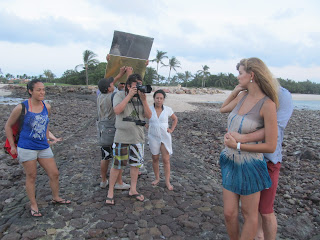 •    Mexico’s Pacific Treasure was the setting of a photo-shoot for “Nupcias”,  a national magazine focused on the wedding and honeymoon market, which will be published in three articles by the months of January and February

In Riviera Nayarit luxury is our magic, a magic that’s being used to write the most romantic love stories. “Nupcias”, a national magazine focused on the wedding and honeymoon market, has chosen the destination as it’s setting for a photo-shoot displaying Mexico’s Pacific Treasure offerings and that will also result in three editorials that will be published in the months of January and February, 2013.

The prestigious publication had already named Riviera Nayarit was named one of the promising destinations for honeymoons and weddings this 2012, in an early social network publication, because of its idyllic landscapes.

The magazine, published by the Grupo Editorial Impresiones Aéreas, has a circulation of 35,000 copies and reaches an audience of approximately 105,000 readers, making it one of the most influential in this market segment.

“We have chosen the months of January and February 2013 to launch these articles and the photos we are doing now, because these are some of the months we have greater circulation, when the demand for Destination Weddings increases along with the proximity to Valentine’s Day.”, said the responsible producer.

The photographs used as backdrops locations such as Punta Mita, Marietas Islands, El Anclote, the Golf Courses and other natural charms of our destination.

Through efforts in public relations like the support provided for the photo-shoot, the Convention and Visitors Bureau (CVB) of Riviera Nayarit is promoting tourism in this destination and throughout the entire state of Nayarit.

The Riviera Nayarit CVB is a civil non-profit association dedicated to promoting tourism through a brand that includes the entire coast of Nayarit, from its border with Jalisco in Nuevo Vallarta to Novillero, at its northern border with Sinaloa, while integrating the historical and cultural attractions available in the rest of the municipalities.

Five events to tempt you to the Riviera Nayarit in September

The Riviera Nayarit Half Marathon, a true ‘Jewel’
0 replies

Riviera Nayarit’s Half Marathon route to be improved Escape the Chills in Riviera Nayarit with Extraordinary Winter Hotel Packag...
Scroll to top