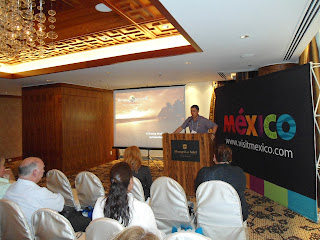 In Riviera Nayaritluxury is our nature, and this nature captured the attention of over 400 travel agents in Vancouver, Edmonton, Calgary and Winnipeg, as the Convention and Visitors Bureau (CVB) of Riviera Nayarit recently completed an important marketing tour together with WestJet Vacations.
The CVB participated in several trade shows organized by WestJet in Canada, in order to introduce the hot touristic offers of our destination to travel agents.
WestJet is the second largest carrier in Canada, operating an average of 425 flights and carrying over 45,000 passengers per day to destinations in Mexico, America and the Caribbean. It has over 8,000 employees and has its main hub in Calgary’s International Airport.
The CVB of Riviera Nayarit decided to intensify its promotion efforts in Canada due to the sharp increase in the influx of tourists from that country. According to the ‘Barometer’ sample taken by the CVB in 2011, 17 percent of all visitors to Mexico’s Pacific Treasure were Canadians.
The intense marketing efforts being made by Riviera Nayarit’s CVB seek to attract tourists to our destination in order to boost the economy of all the people of Nayarit, following the guidelines defined by the Government of the People, headed by Roberto Sandoval.
https://www.rivieranayarit.com/wp-content/uploads/2019/07/logox300.jpg 0 0 Marc Murphy https://www.rivieranayarit.com/wp-content/uploads/2019/07/logox300.jpg Marc Murphy2012-07-31 06:30:002012-07-31 06:30:00Riviera Nayarit participated in a promotional tour in Canada

The Tiger roars at Riviera Nayarit

British Visitors To The Riviera Nayarit Increased in 2014

Passenger arrivals by air to the Riviera Nayarit are increasing