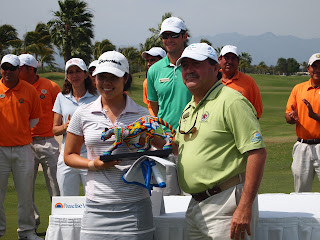 Esther Choe fired a 4-under-par 69 in the final round of the Riviera Nayarit Classic to give her an impressive six-stroke victory over Jean Chua and Ginger Howard at El Tigre Golf & Country Club in Nuevo Vallarta, Nayarit. Choe was steady throughout the three days of competition, sharing or holding the lead in each round.
But Choe admitted adrenaline and nerves got to her teeing off the first tee of the final round, one of only three holes she bogeyed on Sunday.
“I wasn’t shaking nervous but I was just anticipating and anxious,” said Choe. “So out of the gate I was a little frazzled. But after that I was fine.”

She finished the front nine with two birdies on Nos. 5 and 8 and started the back nine with a birdie on the par-5 No. 10. After carding her second bogey of the day on the 11th she rattled off three-consecutive birdies, sinking her longest putts of the week to do so.

“I made some really good, long putts on 12 and 13,” said Choe. “Those were the longest putts I made all week. Twelve was about 40 feet and followed it up with a 30-footer on the 13th.”
Choe closed out her winning round with a three-foot birdie putt on the final hole, receiving a warm applause from the Mexican crowd.
Jean Chua and Ginger Howard finished in a tie for second at 6-under par. A group of three players finished in fourth at 5-under including Taylor Collins, Cara Freeman, and Dawn Shockley.
Back-to-Back Company…After recording her second-consecutive Symetra Tour win, Esther Choe joins a storied group of Symetra Tour alumni who also won back-to-back Tour events during their careers. In the past five years, six different players won consecutive tournaments, each of them finishing in the top-five on the season-ending money-list and earning their LPGA Tour cards the same year. Seo-Jae Lee (2007), Mindy Kim (2008), Vicky Hurst (2008), Mina Harigae (2009), Christine Song (2010) and Sydnee Michaels (2011) all used their double-up wins to earn exempt status for the following season on the LPGA Tour.
Choe Takes the Lead in the “Volvik Race For the Card”
With her win in Mexico, Esther Choe takes a commanding lead in the Volvik Race for the Card standings after three weeks of play in the 2012 Symetra Tour season.  Not anticipating her early success on Tour, Choe has travel and playing arrangements set through June in Europe on the LET.
“I’m really glad because I might be missing some,” said Choe. “It feels really good. I wasn’t really expecting this at all.”
Other notable moves this week include Jean Chua who moved from No. 34 to No.6 and Ginger Howard who jumped from No. 51 to No. 7
At the conclusion of the Riviera Nayarit Classic, players moving into the top-10 spots on the money list are as follows: 1. Esther Choe of Scottsdale, Ariz., $33,750; 2. Megan McChrystal of Stuart Fla., $20,868; 3. Nicole Smith of Riverside, Calif., $13,440; 4. Mi Hyang Lee of Incheon, Korea, $12,575; 5. Sarah Maude Juneau of Quebec, Canada, $12,019; 5. Jean Chua of Kuala Lumpur, Malayasia, $11,622 7. Ginger Howard of Bradenton, Fla., $11,239; 8. Cara Freeman of Chandler, Ariz., $11,033; 9. Hannah Jun of Palm Beach Gardens, Fla., $9,710; 10. Dawn Shockley of Estes Park, Colo., $7,174
https://www.rivieranayarit.com/wp-content/uploads/2019/07/logox300.jpg 0 0 1stonthelist https://www.rivieranayarit.com/wp-content/uploads/2019/07/logox300.jpg 1stonthelist2012-05-01 11:13:002012-05-01 11:13:00Esther Choe Earns Second-Consecutive Victory, Wins Riviera Nayarit Classic

The Riviera Nayarit incentivizes the arrival of tourists from Central America

The Birds Of The Riviera Nayarit On International TV