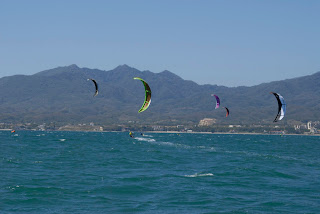 Good wind currents, a challenging swell and wonderful landscapes: Riviera Nayarit is the ideal destination to practice the most innovative water sport, Kitesurfing, in a series of competitions that will be held March 10th-17th, during the Regatta Copa México Olympic Edition.
The competition is expecting to have 50 competitors, including professionals and amateurs from over 10 countries, as well as the Top 15 in the World Ranking and the 2009 World Champion, Sean Farley Gomez, the 2010 World Champion Adam Koch and the 2011 World Champion Johnny Heineken.
Saturday 10 will begin with a downwind from La Cruz de Huanacaxtle to Bucerias, and international kiteboard regattas will take place from Sunday 11 to Saturday March 17, with at least four daily races, according to the International Kiteboarding Association (IKA) and the ISAF current regulations. On Sunday 18 and on Monday, March 19, there will be a freestyle event with 60 additional competitors.
RECOMMENDATIONS TO THE PUBLIC
Although the regattas take place in the open water, stunts in the freestyle category may be visible at times from the coastline on the beaches of Bucerias.
https://www.rivieranayarit.com/wp-content/uploads/2019/07/logox300.jpg 0 0 1stonthelist https://www.rivieranayarit.com/wp-content/uploads/2019/07/logox300.jpg 1stonthelist2012-02-24 10:55:002012-02-24 10:55:00Wind, waves, and lots of stunts in Riviera Nayarit

Enjoy A Great Weekend In The Riviera Nayarit!

Huichol Mariachi only at Riviera Nayarit