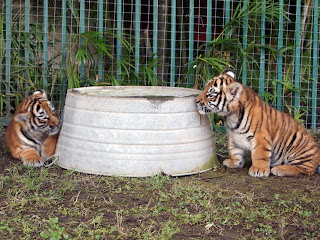 Johnny be good seems to be the hottest hit in Riviera Nayarit. Johnny the tiger lurks in a bush waiting for its brother Albert, and when he gets close, he jumps at him while he bites his neck, and they then roll together, making it hard to tell this game from a real fight.
“Johnny, be good”, says Jesús Camarena, director of El Tigre Golf & Country Club to make the cub stop. He doesn’t say angrily, but instead he says it full of pride: Johnny and Albert are the 77 and 78th cubs born at Paradise Ville Group since they began their tiger reproduction program at their zoo.
The births of these cats and of course their rumps on the golf course are a source of pride for everyone in Riviera Nayarit. With this program, the crew at Paradise Village has created not only a new incentive for people to visit our destination, but it has also contributed to the preservation of this endangered species.
“This time we named the cubs in honor of the people who have made ​​this program successful. Johnny has a small bumpy nose like his caretaker Juan. Lluvia, the cub’s mother, has struck his nose a few times while playing, and we thought Johnny would be a good name. Albert was named after the veterinarian who takes care of our cats, Alberto. It’s only a small tribute”, said Carmona.
Riviera Nayarit is a destination committed to nature, and it’s well aware that this is the main asset that it has to attract visitors to our country. Beach certification programs and ecologic improvement are a priority among members of the Association of Hotels and Motels Bahía de Banderas, and for the Convention and Visitors Bureau (CVB) of Riviera Nayarit.
https://www.rivieranayarit.com/wp-content/uploads/2019/07/logox300.jpg 0 0 1stonthelist https://www.rivieranayarit.com/wp-content/uploads/2019/07/logox300.jpg 1stonthelist2012-01-23 10:12:002012-01-23 10:12:00Riviera Nayarit is roaring! 5th Day Of The Dead Festival In Sayulita

Dallas Cowboy's Cheerleaders are now on the line at Riviera Nayarit

The Riviera Nayarit Is Promoted As An SUP Destination
0 replies