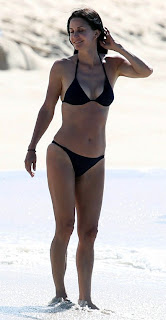 According to witnesses, the former star of the popular TV show Friends, where she portrayed the character of Monica, was seen last Friday, August 5 at the Four Seasons Punta Mita Bahia restaurant, and in the pool area the next day.
Courtney Cox spent the whole weekend in our destination only a few days after publically announcing her separation from agent David Arquette, and she stayed at Los Ranchos, an exclusive and private community in Punta Mita.
Courtney Cox’s trip adds to the long list of celebrities that have visited our destination in 2011, including soccer player Thierry Henry, Kate Hudson, Gerry Lopez, Eric Dane, Soleil Moon Frye, Mario Lopez, Elsa Benitez, Ana Gabriela Guevara and Kim and Kourtney Kardashian.
This year, our destination has also been catalogued as one of the most romantic destinations in the world according to publications like Reuters Life!, Travesías and Bodaclick, and has also been nominated as one of the best 10 destinations for family travel in Mexico and the Caribbean, according to TripAdvisor users, which conferred this nomination as part of the Traveler’s Choice Awards.
Riviera Nayarit’s high-end infrastructure, which is surrounded by natural environments, has also been recognized. This month, the prestigious publication Elite Traveller has chosen Casona Jaguar at Imanta Resort as one of the top 101 suites in the world and Robb Report highlighted this hotel in its “2011 Hot List”.
Additionally, Marival Residences & World Spa in Riviera Nayarit received TripAdvisor’s Certificate of Excellence 2011, and the Four Seasons Punta Mita, St. Regis Punta Mita and the Grand Velas Riviera Nayarit are competing in the finals for the title of “The Most Beautiful Hotel”, by Hospitalitas magazine.
The promotional efforts being made by the Convention and Visitors Bureau (CVB) of Riviera Nayarit are evident though direct posts like the ones made by Mario Lopez in the social networks, which help position our destination as one of the best worldwide. This is a reminder of how important it is for hotels, restaurants, government, service providers, and for society in general to constantly improve the experience of those who visit our destination.
https://www.rivieranayarit.com/wp-content/uploads/2019/07/logox300.jpg 0 0 1stonthelist https://www.rivieranayarit.com/wp-content/uploads/2019/07/logox300.jpg 1stonthelist2011-08-09 11:12:002011-08-09 11:12:00Famous 'Friends' visited Riviera Nayarit

Agents From Peru and Colombia Visit The Area

Which is your favorite golf course at Riviera Nayarit?