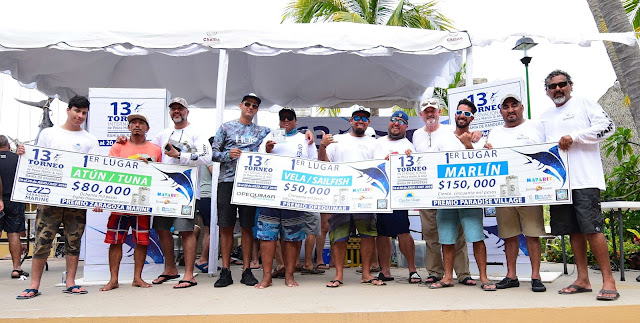 The 13th International Bahía de Banderas Marlin and Tuna Fishing Tournament 2019 ended on a high note with excellent results. Held from July 18-20, the winning “Martuni” team captured a 101.800 kg marlin as well as the prize for “Best Crew.”
Two days of fishing came to an end 6 p.m. on Saturday the 20th when the last catches were registered at the weigh station. The station was located at the Hotel Paradise Village amphitheater, where a good round of mariachi music got the party going before the awards ceremony.
The Club’s board of directors, led by President Eulogio López Rodríguez, were charged with giving the winning fishermen their respective prizes. There were also special prizes and a prize raffle held for the teams that had no captures.
There were 22 teams registered, each with four fishermen each for a total of 88 participants. According to Club President Eulogio López, this is very similar in number to last year’s participants.
“Even though we’re maintaining the number of participants, we hope to increase it for next year,” he said. 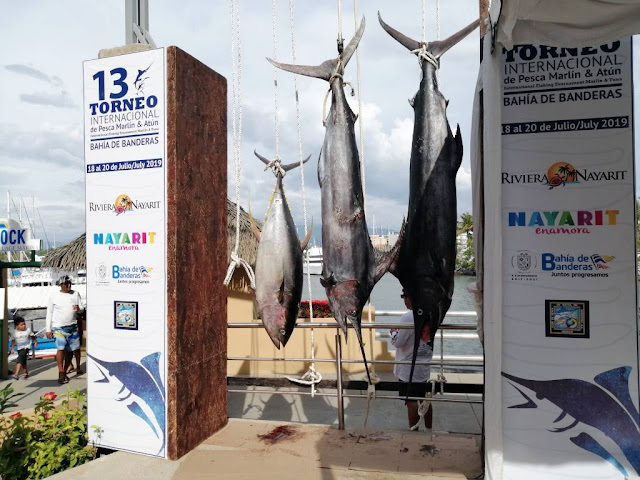 López added that the goal of the Bahía de Banderas fishing club is to promote the Riviera Nayarit as a sport fishing destination with good captures and excellent tuna, marlin (both blue and black), sailfish, and other deep-sea varieties including mahi-mahi.
The Bahía de Banderas Fishing Club organizes the International Bahía de Banderas Marlin and Tuna Fishing Tournament. The competition enjoys the full support of the Riviera Nayarit Convention and Visitors Bureau (CVB) and the Bahía de Banderas Hotel and Motel Association (AHMBB) thanks to its relevance to tourism and sports within the region.
This type of events has helped the Riviera Nayarit shine as a favorite destination for sport fishing aficionados in Mexico.  Its reputation is due to its favorable climate and maritime conditions, and the abundant diversity of species along its more than 300 kilometers of coastline.
RESULTS
+ Winners in the marlin category
Team: Martuni| Prize: 150,000 MXN.
Weight: 101.800 kg | 2.38 | 0.89 cm
(They also won “Best Crew” award.) 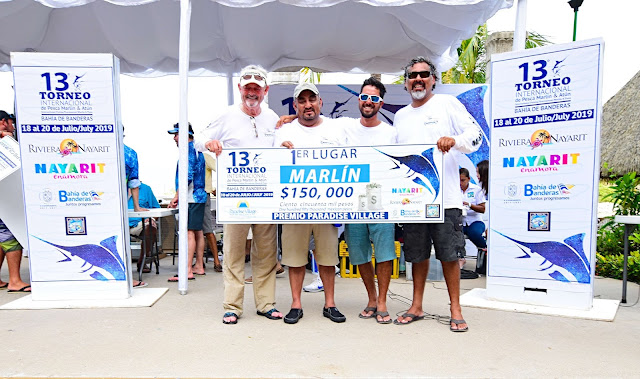 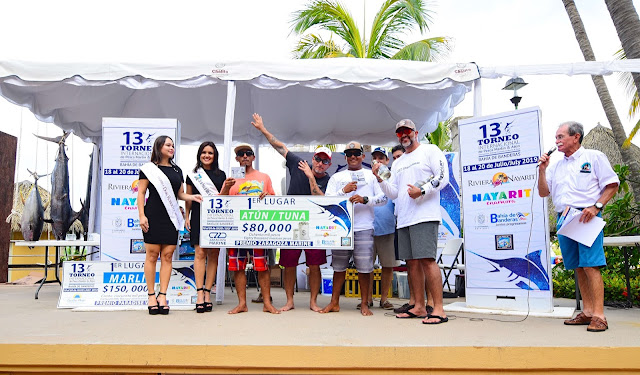 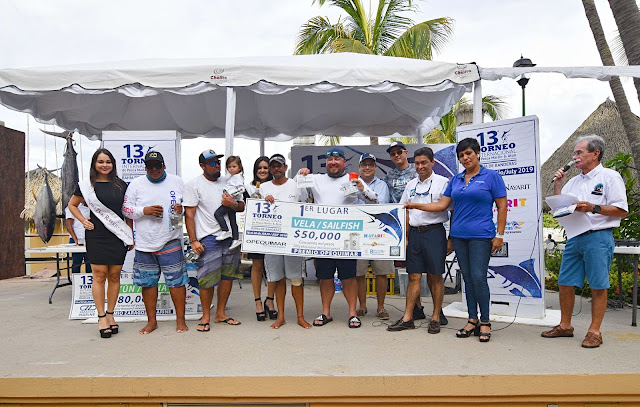 + Winners in the Catch & Release categorie
Team: Martuni | 2nd Capture
*The Mahi-Mahi category was declared null as the captures did not meet the weight and size requirements. 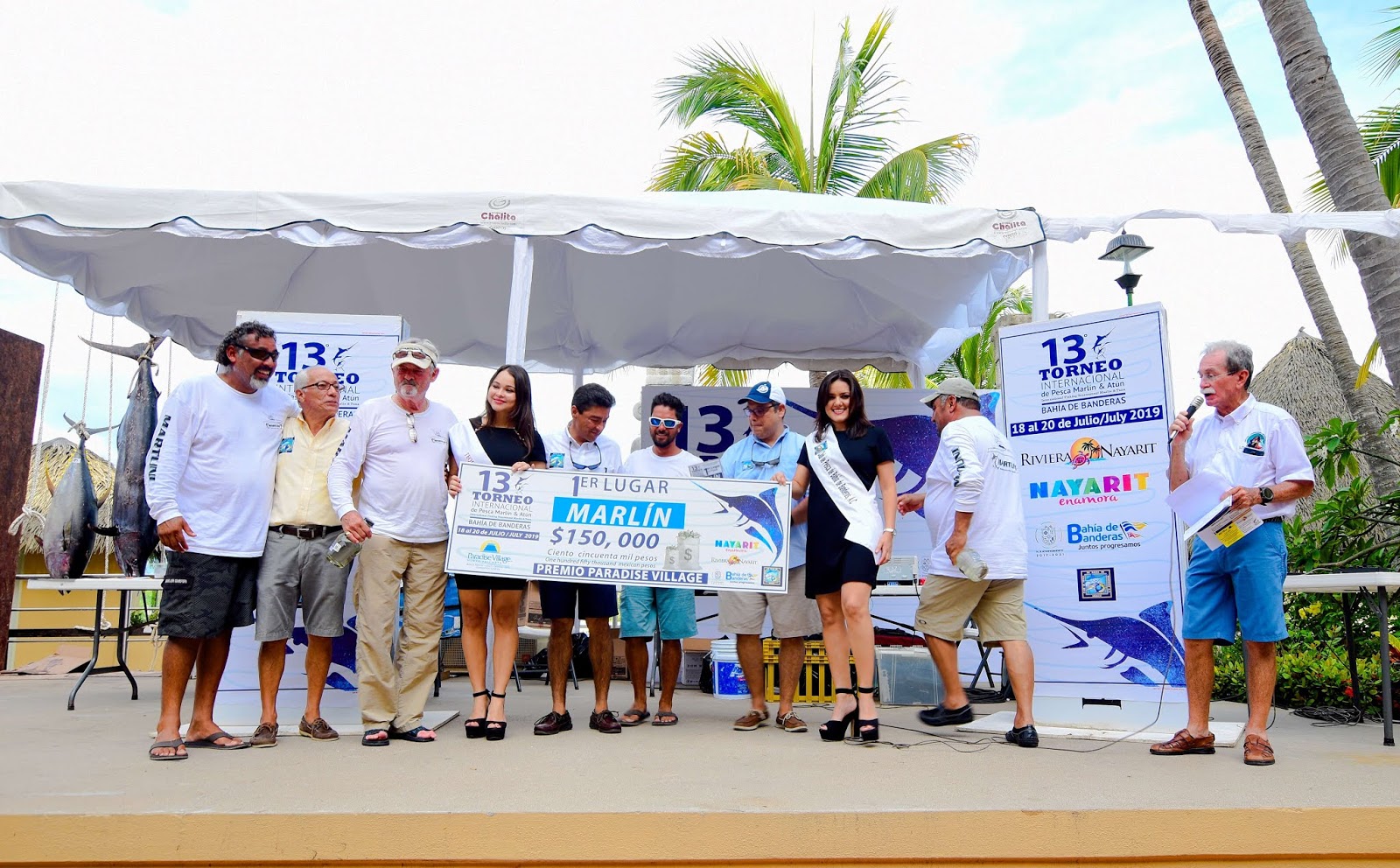 ###
Riviera Nayarit reaffirms its status as an ideal destination for sports tourism thanks to the many world-class events that take place here with the support of the Government of the State of Nayarit via the Tourism Promotion Trust (Fiprotur).
https://www.rivieranayarit.com/wp-content/uploads/2019/07/logox300.jpg 0 0 1stonthelist https://www.rivieranayarit.com/wp-content/uploads/2019/07/logox300.jpg 1stonthelist2019-07-23 05:20:002019-07-23 05:20:00Big win for Team Martuni during the 13th International Bahía de Banderas Fishing Tournament
0 replies