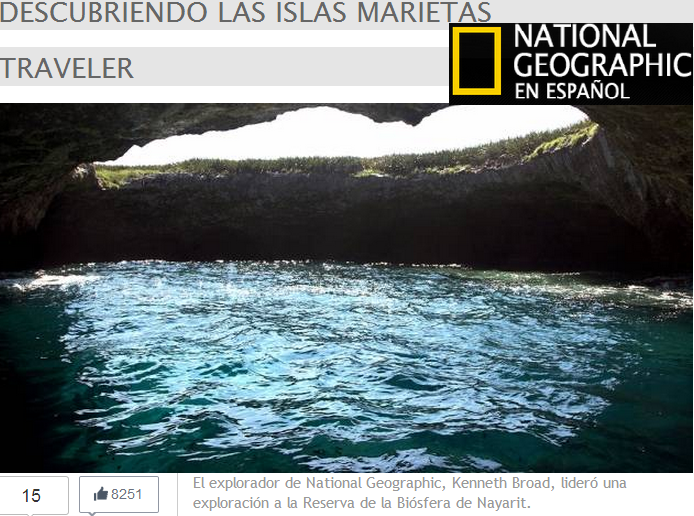 The Marietas Islands, located along the coast of the Pacific Ocean facing the shores of the Riviera Nayarit and geographically situated within the State of Nayarit, were highlighted during an exploration conducted by National Geographic, which resulted in a post with an ample spectrum of readers.
The expedition took place on July 19th headed by anthropologist Dr. Kenneth Broad, who was recognized by National Geographic as the top in his field in 2011. Broad was one of the special guests at the Punta Mita Beach Festival; the author of the content was Erick Pinedo, who published the piece on July 21st.
The note was originally created for the website and the Spanish-language version of NatGeo magazine, but it was also published on social media accounts within the different departments of this conglomerate, which has resulted in thousands and possibly millions of impressions for the destination.
Just 48 hours after publishing the post already had eight thousand “likes” in the Traveler section on the website. During this same time period both Facebook accounts for NatGeo Magazine in Spanish (with more than five million followers) and NatGeo Traveler (with more than 1 million followers) already had over 300 shares each per account.
From the article: “Thanks to the detachment of a part of the dome of the caves, the islands have created small beautiful beaches in the middle of the ocean. The crystal clear waters, which sometimes resemble the Caribbean sea, make this a special place to go diving or snorkeling and enjoy the colorful marine life that abounds here, including brilliant fish, dolphins and turtles, among others.”
The Marietas Islands are a Bioshpere Reserve Recognized by the United Nations Educational Scientific and Cultural Organization (UNESCO) and have become an icon representing the Riviera Nayarit around the world. ONE MORE REASON TO GOLF IN THE RIVIERA NAYARIT!

The Riviera Nayarit Prepares For Its 3rd Twitter Party

The gastronomy of Riviera Nayarit is present at Epazote

Brazil outstands on Pan Am sailing competions at Riviera Nayarit

Charlie, Denise an the kids met Nuna in Riviera Nayarit

US News Recognizes The Quality Of The Riviera Nayarit’s Hotels