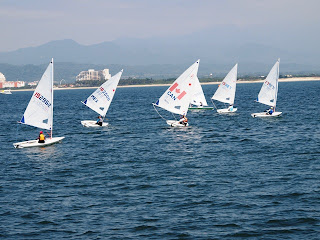 ·   The WesMex Regatta will take place for eight consecutive year in our destination on April 18 – 21, featuring children’s and youth categories
The Vallarta Yatch Club (VYC) located in Marina Paradise Village in Nuevo Vallarta, Riviera Nayarit, will host for eight consecutive year the Wesmex Regatta. This is one of the most important competitions in Mexico for children under 15 in the Optimist and Laser classes. Since last year, the competition also features the Club 420, which will take place on April 18 to 21.
This competition has become one of the two signature tournaments for the Vallarta Yacht Club. This organization has not only been attracting tourism to the region, but has also promoted high performance competitors through their Youth Sailing Program.
One of the objectives of this program, which is open to the general public, is to support the participation of children at various national and international events in representation of Bahia de Banderas. The program also offers scholarships for children in need so that they can train, develop their nautical abilities and improve their decision-making and teamwork abilities, which are an intrinsic component of this sport but also of other aspects of their lives.
To support the training of young sailors, eight years ago the VYC created the WesMex Regatta, which soon became one of the most competitive in the country for these categories and as a qualifying event for the World Championship and European Optimist Championship class, and for the World Youth Laser 4.7 and Laser Radial.
Authorities from the Mexican Sail Federation, the Mexican Optimist Category Association and the Mexican Laser Category Association will regulate the event.
The Convention and Visitors Bureau of Riviera Nayarit congratulates the organizers of this event for the strong support that they’ve provided to this sport, and for contributing to position our destination as one of the favorites for nautical tourism.
A BUOYANT HISTORY
The Optimist class is one of the preferred categories to train new sailors. In general, these vessels are known as single-handed, meaning they’re intended to carry only one passenger. This feature helps children to gain confidence and to develop their abilities.
The Optimist wasn’t originally designed to be a boat; in the beginning it was merely a box with wheels and sails designed in 1947 by Clark Mills to ‘sail’ on the streets. Sometime later, Mills was asked to create a boat that would help train new competitors by allowing for simple, safe and fun navigation – and the Optimist was born.
Around 1975, a new class of boat was needed to train young sailors in Mexico, and the Optimist was chosen over other classes like the Sabot and the Flipper, since it was better organized throughout the world. There are currently over 2,500 vessels in 100 countries, and over 60 associated clubs internationally.
https://www.rivieranayarit.com/wp-content/uploads/2019/07/logox300.jpg 0 0 Marc Murphy https://www.rivieranayarit.com/wp-content/uploads/2019/07/logox300.jpg Marc Murphy2013-04-18 08:27:002013-04-18 08:27:00Young promising competitors will return to Riviera Nayarit