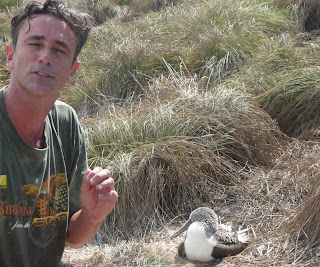 •    Birding Adventures TV recorded its first show dedicated to bird watching in Mexico in the outskirts of San Blas
•    James Currie, show host and birding expert was amazed with the natural wealth of our destination

Mark Stackhouse, one of the most recognized birding enthusiasts in the region of San Blas and in all of Riviera Nayarit says bird watchers like to do crazy things. Once you meet James Currie, host of the American TV show “Nikon’s Birding Adventures”, which is broadcast to millions of homes through cable TV, you’ll realize that this is true.

Currie and his production team were recently in the historic port to record their first birding show in Mexico. Upon arriving to San Blas, they decided to take a few shots at the Mirador de las Garzas where a 6 ft. wall divides the vantage point from the mangrove. From here they saw an American crocodile eating fish, so James jumped over the fence, placed a camera on the floor and when the reptile got too close to him, he started to try to fence it off it with a branch.

“I had to scare it away. I didn’t mind the camera too much, but we got an excellent shot with the crocodile eating and a heron in the background, and I couldn’t afford not getting this shot”, said the adventurer.

And that was just the beginning, Currie was able to shoot eight different endemic species in the first day of work in the Tecuitata area, as well as seven dozen species of migratory birds that he was able to see but decided not to record. He also saw at least 30 humpback whales, went fishing for roosterfish, went to Isla Isabel to see blue-footed boobies and swam with whale sharks on the second day.

On the third day, he visited the estuaries in La Tovara and Zoquipan looking for endemic birds and he was able to see chachalacas, cherecas, herons and magpies, totaling 12 endemic birds in his three-day work trip. He also had time to surf and visit his birding friend Mark Stackhouse to see some of the local bats.

“I’m impressed with the number of different activities that you can do in just one day in San Blas. This is without a doubt, the best one-day experience I’ve had around the world and the destination still has so much to offer for the upcoming days”, said Currie very excited.

“Nikon’s Birding Adventures” is the only TV show that caters to bird watchers in the United States, and is broadcast through cable TV, including Pursuit Channel, the second largest adventure network, which is available in 40 million homes. The show has approximately 200,000 viewers.

THE III PUNTA MITA GOURMET & GOLF CLASSIC TO TAKE PLACE IN RIVIERA NAYARIT,... From the jungle to the sea shore in Riviera Nayarit
Scroll to top