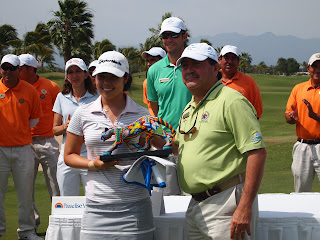 Ester Choe, winner of the Riviera Nayarit Classic, was announced “Player of the Year 2012” at the Symetra Tour and has become the third consecutive winner from this tournament to obtain entrance to the LPGA, the Highest rank for Woman’s Professional Golf.

Since 2010, El Tigre Golf & Country Club in Nuevo Vallarta has been hosting “The Riviera Nayarit Classic” as part of the Symetra Tour.  In 2010 the winner was Cindy Lacrosse, which that same year got her entry into the LPGA Tour.  In 2011 the honors went to American Ryan O’Toole, who also won her qualifications at the Maximum Category after having a very successful rally during the Symetra Tour.
Esther Choe was crowned Winner at Riviera Nayarit 2012 and by the end of the Tour qualified for the top of the Money List after attending only 6 tournaments, setting a record which surpassed even that of the Mexican Woman’s Champion, Lorena Ochoa, who’s debut as a professional was at the lead of the list but only after having played 10 tournaments.
Lorena Ochoa acknowledged that winning at the El Tigre Golf & Country Club is one of the important titles for Professional Golfers; it means joining a prestigious list and a player can then confidently assume he has a spot reserved for himself for the World’s Best Tournaments.

“The Riviera Nayarit Classic” of the Symetra Tour has attracted around to 140 Professional Golfers from around the world to each of its editions.  It was proclaimed Favorite among players not just because of the quality of playing fields or the handsome prizes but also because of the warm welcome and the personalized attention players receive when coming to play at the Tournaments in Riviera Nayarit.

“Nayar,” The Hawksbill Sea Turtle, Returns To The Riviera Nayarit With Interesting News

Did you know that Nayarit coastline in the 16th century have already been&#... – If you’re looking for Relaxation, Riviera Nayarit is your best op...
Scroll to top