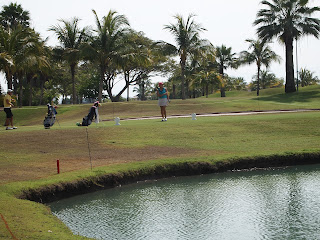 Esther Choe will take a three-stroke lead into the final round after shooting a 2-under-par 71 in the second-round of the Riviera Nayarit Classic. Choe got off to a mild start, teeing off the 10th, and didn’t card a birdie until the par-5 14th. She recorded two birdies and a bogey on both the front and back nine. Tour rookie Calle Nielson will join Choe in the leader group on Sunday for the first time in her young career.
Nielson carded three birdies and her lone bogey on the par-5 10th en route to a 1-under 72. Dawn Shockley rounds out the leader group for the final round and will be looking to improve on her career-best tied for second finish she had a year ago at El Tigre G&CC. Shockley sits in third and four shots off the lead after shooting a 1-under 72 on Saturday.
(Not) Under Pressure…Esther Choe knows a thing or two about playing in pressure situations and is glad to be back in the leader group heading into Sunday’s final round at the Riviera Nayarit Classic. Choe has played on some of the biggest stages in golf including five U.S. Women’s Open Championships, her first in 2005 at the age of 15.
When asked whether she’ll feel any pressure heading into tomorrow or from the fact that she’ll have a chance to take a commanding lead in the Volvik Race for the Card, Choe showed no trace of nerves and explained she’s the most at ease as she’s ever been in her career. “I’m just going to try to keep doing what I’ve been doing and see what happens and have fun,” said Choe. “I appreciate playing well so much more now after the past couple years. I’m just having fun with it.”
Keep Calm & Carry On…During her second round at the Riviera Nayarit Classic, Tour rookie Calle Nielson had to give herself a reminder to take a few deep breaths and not get ahead of her solid play on Saturday. With no awareness of where she stood on the leaderboard, she figured her 1-under par 72 would go up well against the field, considering some tough conditions throughout the day. “I just knew what my playing partners were doing and I was thinking, ‘today is kind of playing tougher than it did yesterday,’” said Nielson. “The pins were tucked a little more and we didn’t have wind yesterday morning.”
Nielson said she’s looking forward to playing in her first leader group and remembers the adrenaline-rushed feeling she had when she won the Southern Amateur last summer. “I mean I’ll be nervous,” admitted Nielson. “When we play golf, this is why we play. I’ll try to go out and keep my pace.”
Might As Well Jump…Fellow Tour rookie, Camilla Lennarth made the most out of her Saturday at El Tigre Golf & Country, making one of the more notable jumps of moving day, starting the day at a T58 and climbing to a T7 at 2-under par. The former University of Alabama stand-out was one of three players to shoot the low-round of the day and only sub-70 round, 4-under 69.
https://www.rivieranayarit.com/wp-content/uploads/2019/07/logox300.jpg 0 0 1stonthelist https://www.rivieranayarit.com/wp-content/uploads/2019/07/logox300.jpg 1stonthelist2012-04-29 09:40:002012-04-29 09:40:00Esther Choe keeps leading the Riviera Nayarit Classic