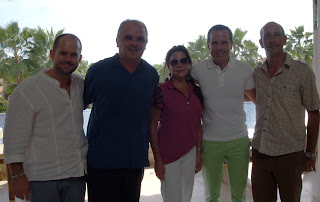 It’s almost a done deal: LIDE, the largest Brazilian business association will organize their yearly meeting in October 2012 at Punta Mita, Riviera Nayarit, after a meeting between Marc Murphy, Managing Director of the Convention and Visitors Bureau of Riviera Nayarit and Carl Emberson, General Manager of the St. Regis Punta Mita, with Joao Doria Jr., President of LIDE.
Entrepreneurial leaders (or LIDE) are the leading organization that assembles the most important Brazilian business owners, entrepreneurs and company executives, who together have sales of over 150 million dollars per year, representing the 40% of the Gross Domestic Product (GDP) of Brazil.
Every year, these leaders organize a meeting abroad, where they not only analyze the economic situation of Brazil and get acquainted with new business tools, but they also host investment workshops with local entrepreneurs.
This event usually includes the participation of the government, state officials, governors and even presidents from both countries, so it receives major coverage in the national and Brazilian media. Several cultural and sports events are also organized, with the attendance of personalities from both countries.
“This year we’re going to Rome, and we’d already been in Mexico in 2005. Important personalities were with us that year, but I have to emphasize the attendance Carlos Slim, who joined us for the three days of the event. Slim is very important and close to us because his Brazilian company, America Móvil, is one of the founders of Lide”, explained Doria.
The President of Grupo Doria praised the beauty of Riviera Nayarit and how appealing it may result to Brazilian entrepreneurs, as they’ll experience a destination that is mostly unknown for most of them, making the experience something innovative and one more reason to attend the meeting.
Joao Doria also said that they already have a great relationship with Carl Emberson, who in the past hosted one of these entrepreneurial meetings while he was General Manager at a property in Mendoza, Argentina, and this guarantees the best possible attention to the event.
“It’s true that a meeting like this is an opportunity that can’t be missed. My experience is that after LIDE took place in Mendoza, Brazilian tourism coming to this Argentinean city quadruplicated and TAM (a Brazilian airline) started servicing this destination”, said Emberson.
Both executives agreed that Brazilian business and conventions tourism is a great niche and a productive market that is always looking for appealing destinations to host their events – and LIDE is the entry point to this market.

The CVB of Riviera Nayarit has offered its complete support to guarantee that this event will take place in Punta Mita, with a firm belief in the importance of it, in the business opportunities that it represents and in the importance of diversifying touristic markets for Mexico’s Pacific Treasure.

8 reasons to visit the Riviera Nayarit this summer

A bit of history on Riviera Nayarit

More to the rain of stars vacationing at Riviera Nayarit

A bit of history from Riviera Nayarit