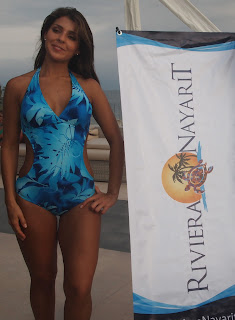 ·   Ujena Jam visited the Mexican Pacific Treasure
·   50 models had a photo shoot sesssion at Marina RivieraNayarit; on Sunday  Ujena Jam Golf & Bikini Tournament will be played at El Tigre
A nice figure looks better if the scenery is as beautiful as who is being portrayed, that’s the reason why Ujena Jam chose to gorgeous locations at Riviera Nayarit, Marina Riviera Nayarit at La Cruz –where last Tuesday June 14th a photo shoot session took place— and El Tigre Golf & Country Club –where the Ujena Jam Golf & Bikini Tournament is to be played next Sunday the 19th.
Ujena Jam is the largest and greatest search for new modeling and photograph talents to the swimming suit fashion industry. Its first edition was organized on Beverly Hills, California, in 1984. Landscapes from all over Bahía de Banderas region have served as locations for six years on a row, since neighbor destination Puerto Vallarta has been chosen the official site from 2007 to this day.
On  2011, over 50 models and 20 photographers had a photo shoot session this Tuesday afternoon at Marina Riviera Nayarit, located on La Cruz de Huanacaxtle, one of most innovating and modern marinas in Mexico surrounded by an astonishing natural environment.
Besides, on Sunday June 19th the Ujena Jam Golf & Bikini Tournament will be held at Paradise Village’s El Tigre Golf & Country Club. This friendly competition will bring the opportunity for  players to get one of the models as their Pin Girl for the round.
Riviera Nayarit’s Connventions and Visitors Bureau (CVB) congratulates organizers for contributing to the promotion of the destination with this kind of events, and particularly to Marival Group and Paradise Village Group for associating with the Ujena Jam to attract more tourism into the destination.
GOOD COMPANY FOR GOLFING
A Golfing  game with a Bikini Pin Girl could be the greatest surprise to celebrate Father’s Day.
Ujena Jam Golf & Bikini Tournament
Sunday June 19th
Prizes for the best three teams
Format: Scramble
Fee: 150 USD, three players each team + Pin Girl
Limited to 18 teams
Further info: (33) 13707548
https://www.rivieranayarit.com/wp-content/uploads/2019/07/logox300.jpg 0 0 1stonthelist https://www.rivieranayarit.com/wp-content/uploads/2019/07/logox300.jpg 1stonthelist2011-06-15 11:42:002011-06-15 11:42:00Bikinis look better at Riviera Nayarit