The Islas
Marietas National Park is one of the jewels of Mexico’s Pacific Treasure, also
known as the Riviera Nayarit. Together with Lover’s Beach, it has become an
icon of this tourist destination. However, despite its fame, undeniable beauty,
and the excitement it inspires in travelers, Lover’s Beach is not the only
attraction of this place of wildlife and adventure. There is so much more!

For starters,
you should know this archipelago—located in Banderas Bay just 8 km from Punta
de Mita—is made up of two islands that date back some 60,000 years to a
volcanic eruption: The Isla Redonda (Round Island), home to Lover’s Beach, and
the Isla Larga (Long Island), home to La Nopalera beach, among other
attractions. There are also two islets and other lesser outcroppings. Together
they cover an area of 1,383 hectares, of which only 1,305 are open to tourists. 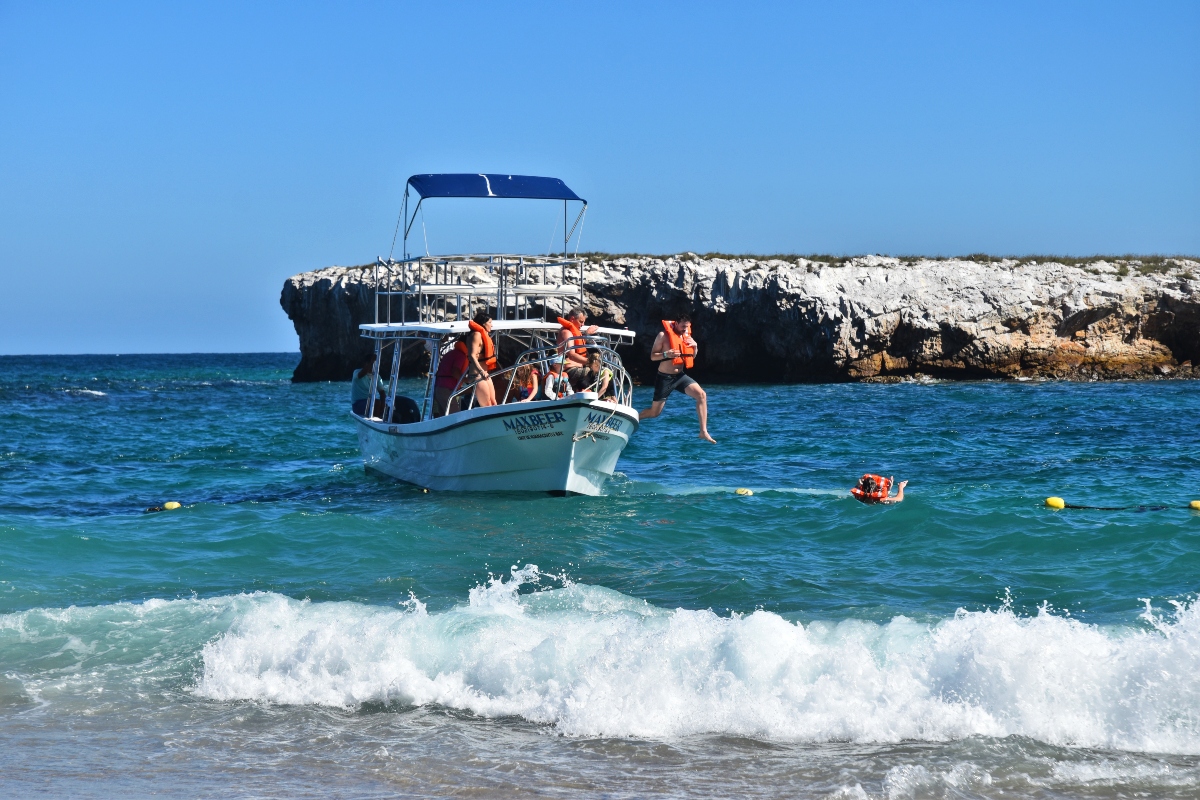 The Islas
Marietas National Park was designated a Protected Natural Area on April 25,
2005; three years later it was named a UNESCO Biosphere Reserve (CONANP, 2008),
in addition to being recognized as a Ramsar Site in 2004 (a wetland of
international importance for its biodiversity and as a bird habitat). This
makes it a privileged place to visit, but one that must also be respected and
cared for.

Would you like to learn more about the wonderful biodiversity of the Islas Marietas National Park and its natural attractions? Keep reading!

La Nopalera Beach
We
begin our tour on a small beach with crystal-clear water and soft white sand
located on Isla Larga. It’s called La Nopalera beach, which surely owes its
name to the many cactus plants (nopales) found at the top of the island.
The beach only forms a few times a year, due to the marine currents and, since
it’s a protected area, access is limited and with restrictions. First of all,
it can only be visited by 120 people per day and, if you want to take a dip in
its marvelous waters, you have to avoid using sunblock, bug repellent, and
suntan lotion. Life jackets are mandatory to travel here. Another requirement
is being accompanied by an authorized guide who will provide you with an ID
bracelet for an extra cost.

When
you visit this gorgeous natural area it’s important for you to follow the
instructions offered by the guides and take care of the place so it can
continue to be admired by others. Remember: “you love what you see, and what
you love you care for.”

From the “Stone Arch” to “Dead Man’s
Cave”
Isla Larga also offers an ample variety of interesting features, worthy
of photographing. Among then, we can mention the “Stone Arch,” “Dead Man’s
Cave,” “The Steps,” and “The Mooring,” as well as a place the local guides call
“The Blowhole”, a marine siphon fed by an intense wave, which turns into an
explosion of mist and dew that splashes over those who come close enough to
take a picture from the boat. There are also several unique rocky vaults or
caves on this beach that offer a spectacular view of the sea. One in particular
is very large and can be accessed from the interior of the island. It’s
amazing!

If you’ve already been on Lover’s Beach or if you couldn’t access it due
to the restrictions (remember tourist access has been limited since 2014 and
only 116 people can visit per day; it’s also closed on Mondays and Tuesdays),
you will definitely enjoy a tour of Isla Larga.

Self-Guided Path
Four years ago, the National Commission of Natural Protected Areas
(CONANP) opened a 300-meter self-guided path in La Nopalera. At the time it was
said to be a good option for tourists and locals interested in sustainable
tourism. Although the trail is currently closed to the public, it is certainly
a wonderful option from which to appreciate the parks scenic beauty.

Reptiles such as the black iguana, or garrobo (Ctenosaura pectinate) and
the green iguana (Iguana iguana); snakes like the night snake or
cat’s eye (Hypsiglena torquata) and the neotropical whip snake (Masticophis mentovarius varilosos) call this place home. There is also all
kinds of vegetation, including different types of grasses and vines.

Today the trail is still maintained by the CONANP and is only used by
park staff and authorized investigators.

Incredible biodiversity
The Islas Marietas National Park contains one of the most important reef
formations in Banderas Bay. Biologist Amilcar Cupul reports there are more than
10 species of hermatypic coral in the area. In addition, one can find other species
around the islands such as the giant manta (Manta birostris), the spiny ray (Dasyatis brevis), the hammerhead shark (Sphyrna
lewini), the silky shark (Carcharhinus
falciformis), and the bull shark (Carcharias
taurus), and is an important site for the reproduction of the humpback
whale (Megaptera novaeangliae), and other species of cetaceans, as well as
dozens of species of sea birds that fill the air with their cries, creating a
symphony of trills and other sounds.

HOW TO GET THERE
To
reach this nature sanctuary you can hire a boat, yacht, or take a tour—all must
be authorized—departing from Nuevo Vallarta, La Cruz de Huanacaxtle, El
Anclote, Sayulita, or Lo de Marcos in Banderas Bay, or from Puerto Vallarta in
the neighboring state of Jalisco. There are several qualified companies in the
region that offer these tours, including Punta Mita Expeditions and Vallarta
Adventures, as well as the tourist cooperative in El Anclote. All can accompany
you on this extraordinary experience.

Remember,
Mexico’s Pacific Treasure will be here when the COVID-19 crisis is over. In the
meantime: #StayHomeWithRivieraNayarit

Visit
our website: www.RivieraNayarit.com.mx
###
The Riviera Nayarit Convention and
Visitors Bureau (CVB) and the Bahía de Banderas Hotel and Motel Association
(AHMBB) work tirelessly to promote the destination with the support of the
Government of the State of Nayarit via its Tourism Promotional Trust (Fiprotur).
The cultural tourism offer in the region is a key asset for these promotional
activities.
https://blog.rivieranayarit.com/wp-content/uploads/2020/04/112BIslas_Marietas_Riviera_Nayarit.jpg 557 1200 Norma Hernández https://www.rivieranayarit.com/wp-content/uploads/2019/07/logox300.jpg Norma Hernández2020-04-17 13:30:002020-06-02 10:42:43The Riviera Nayarit’s Islas Marietas National Park: There’s more to it than Lover’s Beach!

Mexico charmed by “Nayarit Enamora” and the Riviera Nayarit

Wellness Sabbatical: Work and chill from the Riviera Nayarit!
0 replies