Blue-footed
booby (Sula nebouxli) might not the most elegant name, but it’s the
right one for this charming bird also known in Spanish as the pájaro bobo de
patas azules, one of the most admired species by birdwatchers who come to
the Riviera Nayarit. 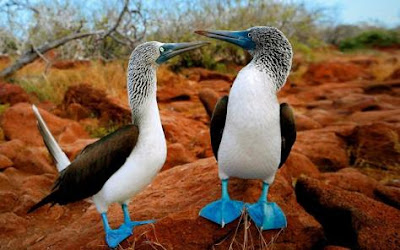 It’s
called a “booby” because of its vague look and stumbling walk while on land,
but the birds are in their element in the water: they’re excellent swimmers and
even better fishers—they’re really not boobs at all!

A few years ago, there was a myth swirling around
that these unique blue-footed birds could only be found in the Galapagos
Islands—a volcanic archipelago in the Pacific Ocean across from the coast of
Ecuador—, but the truth is they’re found all along a stretch of the American
Pacific. In Mexico, for example, they have chosen the coast of Nayarit to live
and reproduce, specifically the Marietas Islands National Park and the Isabel
Islands National Park, as well as other islets in the state of Nayarit that
have become a sanctuary for the species. They mate there, have their chicks,
and co-exist with the Sula leucogaster—the brown-footed booby—and
another 90 bird species, including the frigate and the Mexican seagull (Larus
heermanni). 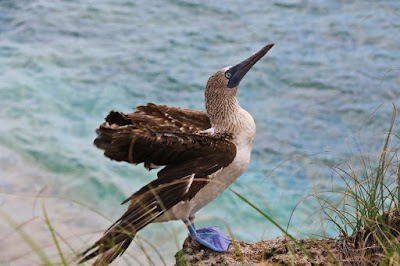 Research biologists say the blue-footed booby
measures between 30 and 85 centimeters, with a white body and a dark mottled
back; its wings are long and dark; its tail is pointed, and its beak is long
and sharp. Of course, its large blue webbed feet stand out and it shows them
off in wide strides during its courtship to conquer its mate. The bird with the
bluest legs is the most attractive.

Another of its characteristics is that it feeds in a
spectacular manner: when fishing, they rise up to mid-height watching keenly
for the slightest flutter of a fin; once it locates its prey it dives several
meters deep to catch it, reaching speeds of up to 96 km/hour. 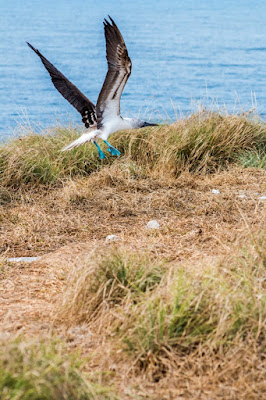 Research
shows the blue-footed booby is not only attractive, but also very useful in the
ecosystem because it is a “bioindicator” species, that is, it reflects both the
condition of the ocean and marine productivity by modifying its diet and the
growth rate of its chicks according to the availability of food (MacCall, 1982;
Ricklefs et al. 1984; and Jahncke and Goya, 2000). For
your next trip to this tourist destination, book a tour to the Marietas Island
National Park. Once you’re there, keep an eye out to see the birds resting
calmly on the rocks or, if you’re lucky, engaging their extraordinary fishing
abilities. 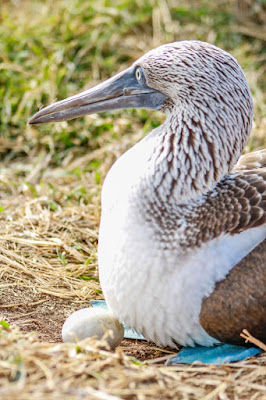 We
remind you that the Marietas Islands National Park was named a UNESCO Biosphere
Reserve in 2008. You only have to discover it to know that not only is it a
treasure of the Riviera Nayarit, but the world, and must be preserved intact.

When
the COVID-19 health crisis is over, Mexico’s Pacific Treasure will be waiting
for you. Meanwhile: #AtHomeWithRivieraNayarit

Visit
our webpage: www.RivieraNayarit.com.mx
###
The Riviera
Nayarit Convention and Visitors Bureau (CVB) and the Bahía de Banderas Hotel
and Motel Association (AHMBB) reaffirm their commitment to the strategic
promotion of the destination, pursuing opportunities, and consolidating new
markets to increase the number of incoming tourists with the support of the
Government of the State of Nayarit via the Tourism Promotion Trust (Fiprotur).
https://blog.rivieranayarit.com/wp-content/uploads/2020/04/12Bpajaro2Bbobo2Briviera_nayarit.jpg 557 1200 Norma Hernández https://www.rivieranayarit.com/wp-content/uploads/2019/07/logox300.jpg Norma Hernández2020-04-06 21:21:002020-06-02 10:42:45The charismatic “booby,” an icon of the Riviera Nayarit

Golf with a cause in the Riviera Nayarit: 2nd Delia Morán Vidanta Foundation Tournament

In the Riviera Nayarit you can enjoy your favorite restaurant meal without leaving...
Scroll to top