Whenever
a crisis occurs anywhere in the world, whether it be economic, a natural
disaster, or a health issue (like the current one we’re experiencing with
COVID-19), there is also unity and solidarity among people. Consciences begin
to move and the desire to help the vulnerable grows.

In
the Riviera Nayarit, these unprecedented events have served to showcase the
hospitality the destination has always been known for, and the response has
surged on all fronts—public, private, and social—and the tourism sector is more
united than ever.

We
are pleased to see that Civil Society Organizations (CSO) are doing their part;
some of these have allied themselves with the Riviera Nayarit Convention and
Visitors Bureau (CVB) and the Banderas Bay Hotel and Motel Association (AHMBB).
Thus, mutual aid prevails, as does the support for health and government
authorities.

Below
please find some of the initiatives currently going on in the Riviera Nayarit that
lend their support during the COVID-19 crisis, as well as the organizations
that are contributing their “grain of sand.”

The Riviera Nayarit Restaurant
Association
The
Riviera Nayarit Restaurant Association, headed by Mario Nasser, has arranged
for food to be provided on a daily basis to the police and highway patrols that
are monitoring the health checkpoints in Sayulita and Jarretaderas. Restaurants
such as Il Padrino di Vallarta, La Quinta Di Francesco, El Chivero, La Puerca
Chula, Mar y Sol, Toscana Mía, and Mediterráneo are part of the initiative. Of
note is the individual support provided by chef Ricardo Santana, who is
providing breakfast for all the staff working at the checkpoints. Good for
them! 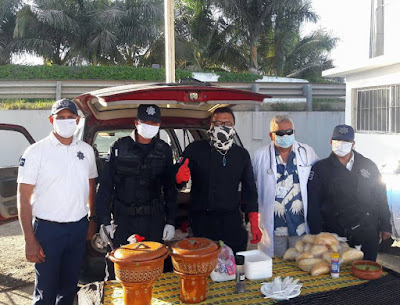 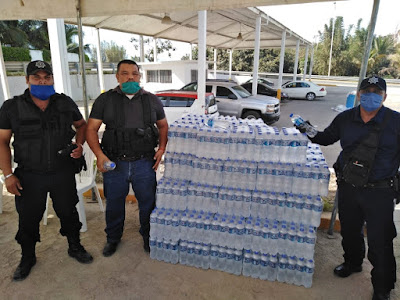 PEACE Punta
de Mita and Punta Mita Resort
The
work done by PEACE Punta de Mita and Punta Mita Resort is another example worth
highlighting. A DINE property, the resort has joined forces with the entity to
design both short and long term plans to address the crisis that has begun to
seriously affect the lives of the 3,000 who call Punta de Mita home. With the
help of PEACE staff and a group of local restaurants (Babelas’s, Tuna Blanca, and
Hector’s Kitchen—they hope more people will join the work group), they have
identified the families of nearly 200 children and 100 elderly people in the
towns of Punta de Mita, Corral del Risco, and Higuera Blanca who are at risk of
not having food on a daily basis. The immediate response plan is to distribute bags
of food each week, with the first delivery deployed last week thanks to the
support of La Comer supermarket. There’s no doubt the number of needy families
will continue to grow; however, the staff at PEACE are in the process of
identifying them by name and family size to ensure that food supplies are
provided only to the town’s inhabitants.

In
summary, the plan prioritizes unemployed families with children with the
possibility of expansion to all 1,100 families, based on the number of
donations that arrive and the duration of the effects of the pandemic in Punta
de Mita.

If
you’re interested in making a donation, please write to events@puntamita.com
and refer to the Punta de Mita Humanitarian Aid Fund. 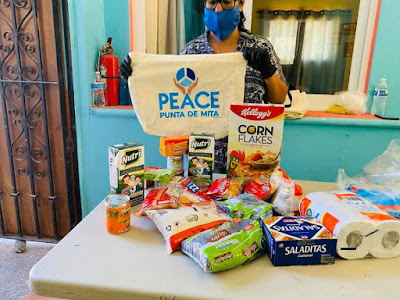 Community kitchens
Civil
society has also organized to support vulnerable families who have been left
without income due to the COVID-19 crisis. One of these actions is the
installation of community kitchens.

An
organized group from La Peñita de Jaltemba in the municipality of Compostela,
led by César Pérez Novoa and his wife Ángela, started this project in that
town. It was later expanded to Rincón de Guayabitos and Los Ayala, and then on
to the Paraíso neighborhood and the town of El Monteón. 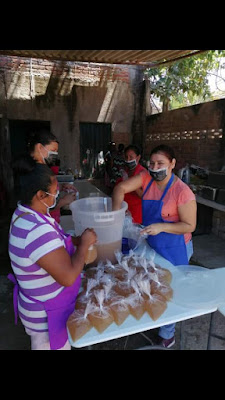 This
week, the Governor of the State of Nayarit, Antonio Echavarría García,
announced that community kitchens will be installed throughout the state, which
requires the support of private initiative, municipal authorities, and neighborhood
leaders.

Making
an impact
The
tourism promotion work carried out by the Riviera Nayarit Conventions and
Visitors Bureau is sustained by the contributions of civil society and will make
a positive impact on the lives of thousands of people.

We
encourage you all to share a ray of hope in your community by donating food and
supplies to your staff or to those who are most affected. We would like to
share what you are doing and inspire others to do the same.

Remember,
Mexico’s Pacific Treasure will be here when the COVID-19 health crisis is over.
In the meantime: #StayHomeWithRivieraNayarit

Visit
our website: www.RivieraNayarit.com.mx
###
The Riviera
Nayarit Convention and Visitors Bureau (CVB) and the Bahía de Banderas Hotel
and Motel Association (AHMBB) reaffirm their commitment to the strategic
promotion of the destination, pursuing areas of opportunity and consolidating
new markets to increase the number of incoming tourists with the support of the
Government of the State of Nayarit via the Tourism Promotion Trust (Fiprotur).
https://blog.rivieranayarit.com/wp-content/uploads/2020/04/asociaciones2Bciviles2Briviera_nayarit.jpg 603 1299 Norma Hernández https://www.rivieranayarit.com/wp-content/uploads/2019/07/logox300.jpg Norma Hernández2020-04-15 13:30:002020-06-02 10:42:44Help in action in the Riviera Nayarit: Civil organizations that inspire

The Bucerías Patron Saint Festivities Begin in the Riviera Nayarit

Speed and adrenaline in Riviera Nayarit

The Riviera Nayarit: A Favorite With Celebrities

The Riviera Nayarit opens up an online window for you to enjoy amazing expe...