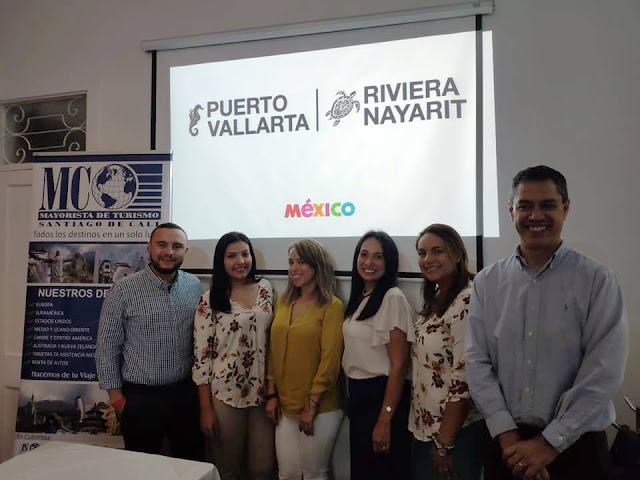 The joint Puerto Vallarta-Riviera Nayarit promotional tour visited four cities in Colombia (Cali, Medellín, Bucaramanga, and Bogotá) from June 17-21. The team was comprised of representatives from the Riviera Nayarit Convention and Visitors Bureau (CVB) and the Puerto Vallarta Tourism Trust (Fidetur) who updated and trained more than 300 travel and sales agents.
During their respective presentations to the South American wholesalers, the promoters for each destination touted their tourism attractions and the best way to fly to this idyllic region in the Mexican Pacific with information provided by executives from airlines including Aeroméxico, Interjet, Avianca, and Copa Airlines.
The events also included the participation of 23 of the top Colombian wholesale agencies: CIC Travel, Solaris, Aliados, Pelícanos Tours, Travel Depot, Solways, Luz Verde, MCO, Cielos Abiertos, TuReserva.com, Mayor Plus, and Turivel, as well as representatives from nine hotels in the Riviera Nayarit, among them AMResorts with Dreams Villamagna and Krystal Reflect Nuevo Vallarta, Decameron, Hard Rock Nuevo Vallarta, Iberostar Playa Mita, Occidental Nuevo Vallarta, Palladium, Paradise Village, and Riu Hotels. 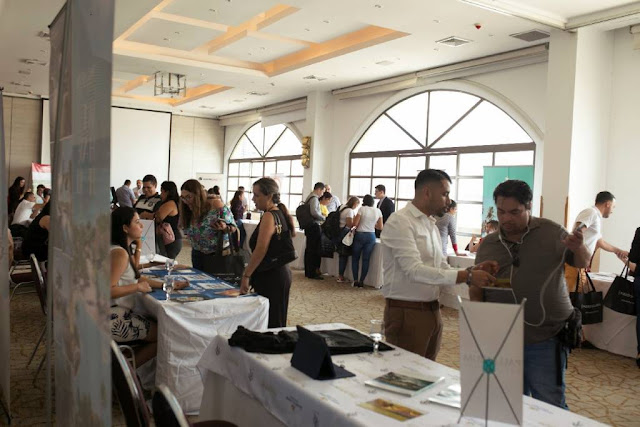 New flight from Cali to CDMX
The first city on the list was Cali, also known as the “Salsa Capital of the World,” where the team sponsored a dinner presentation for 62 travel agents. During the event, Aeroméxico announced its new Cali-CDMX-Cali flight beginning July 16 with four frequencies per week, thus increasing the connectivity between the country and Mexico.
The teams held two additional meetings: one with 20 representatives from the top travel agencies for Cali’s MC Mayorista de Turismo, plus a dinner with representatives from online wholesaler Price Travel and 12 of its best salespeople. Representatives from six hotels from both destinations were also at the event, among them Hard Rock Nuevo Vallarta, Iberostar Playa Mita, Occidental Nuevo Vallarta and Paradise Village, plus executives from Aeroméxico and Copa Airlines. 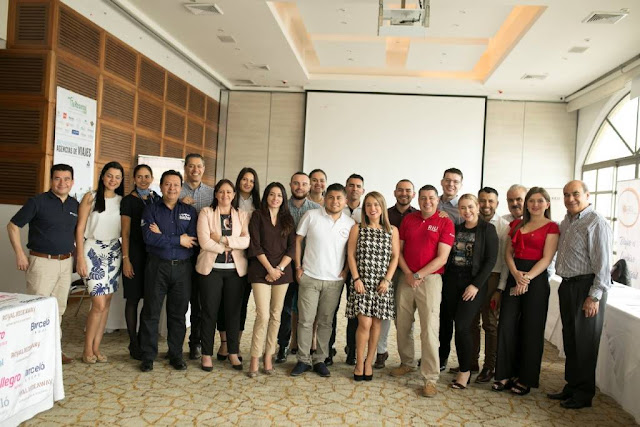 High-flying Bogotá
Once the activities in Cali were over, the team continued on to Bogotá, the capital of Colombia, where they sponsored a dinner presentation for 90 travel agents and updated them on the tourism product from both the Riviera Nayarit and Puerto Vallarta. Of note is the fact that there is plenty of air connectivity to the area from Bogota and its environs: a Copa Airlines flight from Panama; two Aeroméxico daily flights to Mexico City; one daily Interjet flight; and an additional flight on Avianca.
The event in Bogotá garnered coverage from six local media: Alejandra Asegura, from Ladevi; Paola Morales, Report Colombia; Juan Sebastián Duque with Turismo Hoy; Briceida Hernández with Aviatur; Juan Bautista with Despegando.com; and Juan Carlos Montes with Diario La República. The media was invited by the Newlink Public Relations and Communications office in Bogotá. 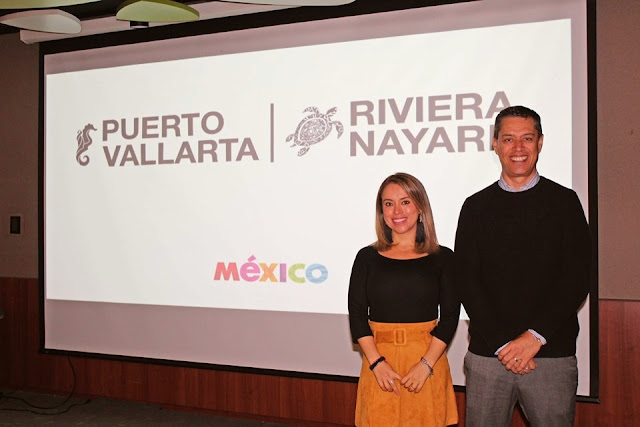 Finally, the team visited the cities of Bucaramanga and Medellín, where they trained 140 travel agents in two presentation dinners, respectively. Bucaramanga now has a direct flight with Panama—very good news for tourists interested in traveling to the Riviera Nayarit, as before they had to travel to Bogotá to make the connection and then board three flights to get to the destination. Medellín also has Copa Airlines flights via Panama, and one daily flight to Mexico City via both Aeroméxico and Interjet.
“The Riviera Nayarit CVB continues its outreach to markets beyond North America with these promotional actions,” said Marc Murphy, managing director for the Riviera Nayarit Convention and Visitors Bureau and the Bahía de Banderas Hotel and Motel Association (AHMBB). “The constant presence of the brand in South America has given us very good results: according to recent statistics, Colombia has become one of the top countries of origin from the Southern Cone to our region.” 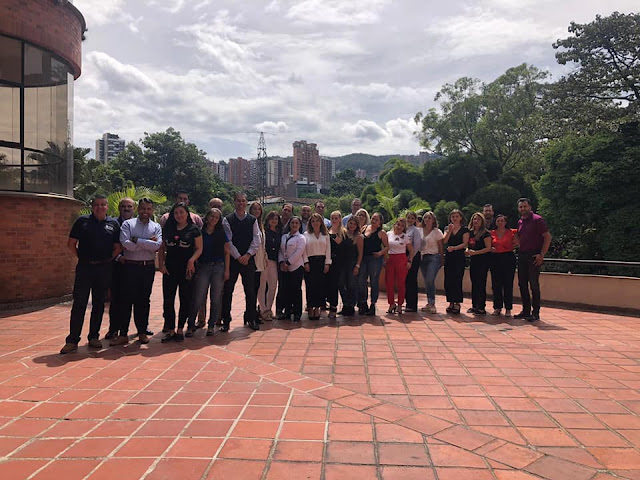 MORE INFO:
According to Mobile Travel Report, the Colombian tourist not only seeks a sun and sand destination, but also one with culture and traditions. They are willing to pay between $878.531 and $1.117.519 USD for airfare and still prefer shorter trips of approximately three days, followed by one-week stays.
With respect to accommodations, Colombians look for a balance between comfort and luxury, which goes hand in hand with the Riviera Nayarit’s tourism offer. 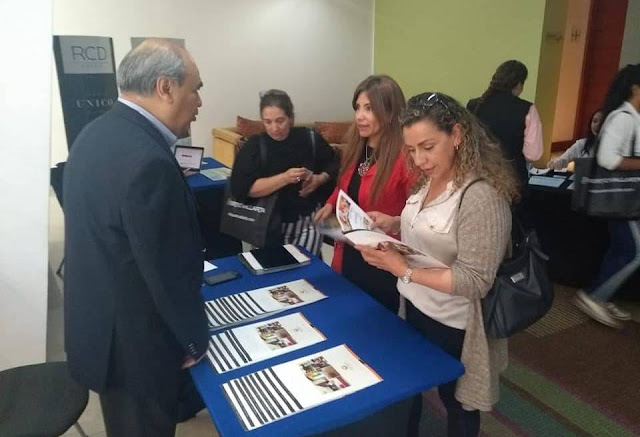 ###
The Riviera Nayarit Convention and Visitors Bureau (CVB) and the Bahía de Banderas Hotel and Motel Association (AHMBB) are work intensively to promote the destination with the support of the Government of the State of Nayarit via its Tourism Promotional Trust (Fiprotur).
https://www.rivieranayarit.com/wp-content/uploads/2019/07/logox300.jpg 0 0 1stonthelist https://www.rivieranayarit.com/wp-content/uploads/2019/07/logox300.jpg 1stonthelist2019-07-02 05:20:002019-07-02 05:20:00The Riviera Nayarit focused on boosting tourism from Colombia