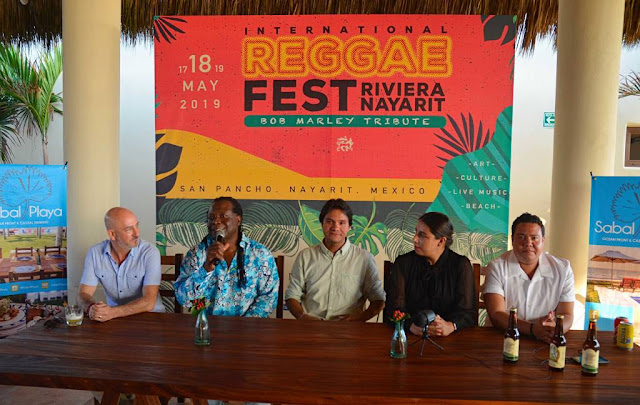 The International Reggae Fest – Riviera Nayarit 2019 has arrived in San Pancho, Nayarit. This Cultural, Artistic, and Musical event will join two nations—Jamaica and Mexico—to share the best of two cultures.
The festival will take place May 17-19, 2019 in the coastal town known as “The Cultural Capital of the Riviera Nayarit” in tribute to Bob Marley, one of the most iconic figures in the world of reggae music.
During the press conference led by the Festival Organizing Committee, the Ministry of Tourism of the State of Nayarit, the Bahía de Banderas Hotel and Motel Association, and the Riviera Nayarit Convention and Visitors Bureau, it was announced the event is expected to be a community affair with a fun, family atmosphere.
Marc Murphy, managing director of the Riviera Nayarit Convention and Visitors Bureau (CVB) and the Bahía de Banderas Hotel and Motel Association (AHMBB), added that both entities lend their support to over 80 different events throughout the year via their Groups and Events offices. “This type of actions definitely increases the arrival of visitors that benefit the tourism services platform in the entire region, while giving the destination projection on a national and international level,” he added.
According to Festival Producer Germán Escobedo, some 2,000 people are expected to attend the massive concert on May 18th with an additional 1,000 over the next three days of the event. Escobedo also said expectations are running high, which is why most hotels in San Pancho have seen an increase in reservations for the upcoming week.
In addition to having a completely Jamaican theme, the International Reggae Fest is the perfect opportunity to pay tribute to the legendary Bob Marley, the main exponent of reggae music in the world and much admired for defending social equality, peace, justice, freedom, and human rights.
The line-up includes reggae stars from Jamaica, Chile, Germany, and, of course, Mexico. Among them: Jamaica’s Kass Smith, who has lived in the region for several years; Quique Neira, ex-vocalist for Gondwana; Nateesha Stream, Teacha Dee, Jade 420, DJ Natty Congo Crew, Goade Band, and Jah Wiz.
Kass Smith, one of the stars of the festival and a very important part of the organizing committee, highlighted the support and sponsorship of the Bahía de Banderas Hotel and Motel Association (AHMBB) and the Riviera Nayarit Convention and Visitors Bureau (CVB), via the Tourism Promotion Trust of the State of Nayarit. Likewise, the event has the support of the Jamaican Embassy in Mexico, the Jamaica Tourism Department, and the Tourism Promotion Office of the Americas the Caribbean, and the Coca-Cola and Copa Airlines brands, among others. 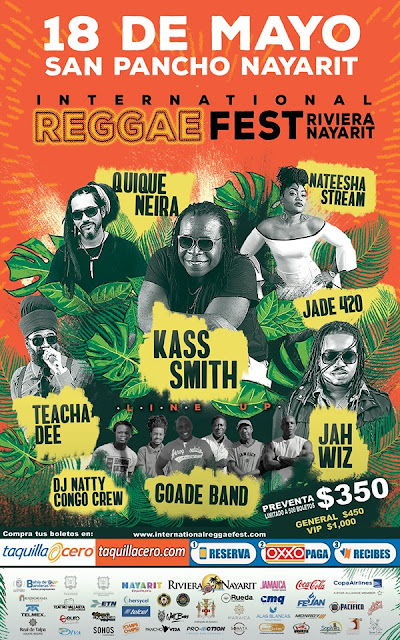 THE PROGRAM
·    The activities begin on Friday, May 17th, with a cultural program at the Plaza del Sol in San Pancho with a performance by the Amado Nervo Children’s Choir at 10 a.m.
·       The Bob Marley Tribute Concert starts Saturday the 18th at 4 p.m. at the soccer field in San Pancho.
·      The party continues on the beach in San Pancho on Sunday, May 19th, with live music starting at 2 p.m.
Of note is the fact that even though the event will last three days, all of the activities are free of charge with the exception of the one concert on Saturday, May 18th.
Concert tickets can be purchased at Farmacias Medisim and taquillacero.com. The organizers also confirmed there are general admission tickets available ($450 pesos) and VIP ($1,500 pesos).
For more details: https://web.facebook.com/InternationalReggaeFest/
###
The Riviera Nayarit Convention and Visitors Bureau (CVB) and the Bahía de Banderas Hotel and Motel Association (AHMBB) continue to strengthen the promotion of the destination, helping to position it on the international maps with the support of the Government of the State of Nayarit via the Tourism Promotion Trust (Fiprotur).
https://www.rivieranayarit.com/wp-content/uploads/2019/07/logox300.jpg 0 0 1stonthelist https://www.rivieranayarit.com/wp-content/uploads/2019/07/logox300.jpg 1stonthelist2019-05-14 14:59:002019-05-14 14:59:00Mexico and Jamaica together in the 201 International Reggae Fest Riviera Nayarit

The Tourism Recovery In The Riviera Nayarit Is A Done Deal

FIRST EVER INTERNATIONAL SURFING ASSOCIATION WORLD CHAMPIONSHIP TO BE HELD IN MEXICO, MAY 10-17