The Riviera Nayarit is taking its charm, luxury, and nature to the 44th Tianguis Turístico México 2019 taking place from April 7-10 at the Mundo Imperial convention center in the port of Acapulco with the participation of potential buyers and tourism marketers from 60 countries.
The event—organized and coordinated by the Federal Ministry of Tourism—, has been held every year since 1976 and is considered the most important of its kind in the country’s tourism industry. This is a business platform for the sector with the participation of over 600 exhibitors representing the 32 Mexican states. The event was originally held yearly in Acapulco but became itinerant in 2012, changing destination every year and returning to its original home every two years.
Nayarit Enamora
The delegation from the Riviera Nayarit Convention and Visitors Bureau (CVB) and the Bahía de Banderas Hotel and Motel Association (AHMBB) will be at the Nayarit Enamora pavilion hosted by the Ministry of Tourism of the State of Nayarit.
With respect to the Riviera Nayarit’s participation in the event, Jesús Carmona Jiménez, president of the AHMBB, said the Tianguis Turístico México is a showcase where all the destination’s services and attractions will be displayed before hundreds of travel agents, wholesalers, and tour operators from different parts of the world.
“During this year’s Tianguis we’re merely going to reaffirm what we already saw at the Gala Puerto Vallarta-Riviera Nayarit, which was our region’s most relevant tourism event,” he said. “In the case of the Riviera Nayarit we’re going to open new markets, especially in Latin America where we’ve been campaigning strongly. What’s most important is to give continuity to what we’ve achieved with our sister destination, Puerto Vallarta—to continue to promote the region together, which is something we can’t let drop.”
Likewise, Marc Murphy, director of the Riviera Nayarit Convention and Visitors Bureau, announced there was already an agenda set for business appointments over the course of the three days from 8 in the morning until 6 in the evening with wholesalers, airlines, and business partners. There’s also an agenda set up for meetings and interviews with the top international and national media.
“We want tourism professionals who visit Mexico to take home a great impression and come back to experience a vacation here for themselves; we want them to fall in love so later on we can close more and better business deals for our destination,” he added.
The flavors of Nayarit will be on display once again at the Tianguis Inauguration Cocktail on Sunday, April 7th, with traditional dishes from the region prepared by chef Betty Vázquez, the Riviera Nayarit’s Culinary Ambassador. Israel Díaz, the Mixology Ambassador, will also be there.
As it does every year, the Nayarit Enamora Pavilion will share the image of the Huichol culture through the presence of artisan Rogelio Benítez, and there are different activations planned so the attendees can get to know more about Nayarit and its Riviera. 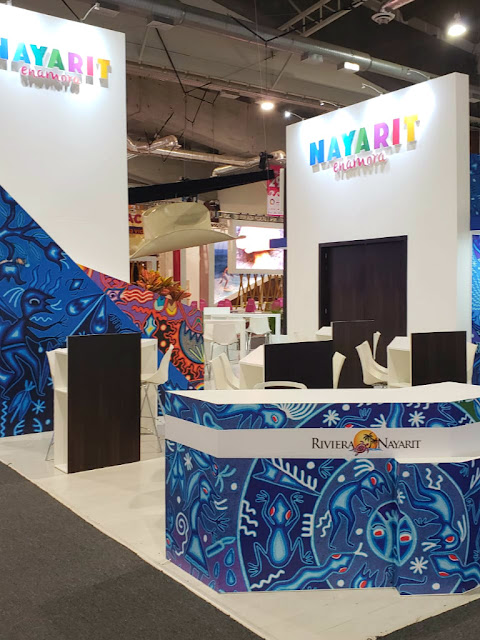 About Tianguis Turístico 2019
####
The Riviera Nayarit Convention and Visitors Bureau (CVB) and the Bahía de Banderas Hotel and Motel Association (AHMBB) reaffirm their commitment to the strategic promotion of the destination, pursuing opportunities and consolidating new markets to increase the number of incoming tourists with the support of the Government of the State of Nayarit via the Tourism Promotion Trust (Fiprotur).
https://www.rivieranayarit.com/wp-content/uploads/2019/07/logox300.jpg 0 0 1stonthelist https://www.rivieranayarit.com/wp-content/uploads/2019/07/logox300.jpg 1stonthelist2019-04-08 12:00:002019-04-08 12:00:00Riviera Nayarit seeks new markets in Acapulco during Tianguis Turístico México 2019