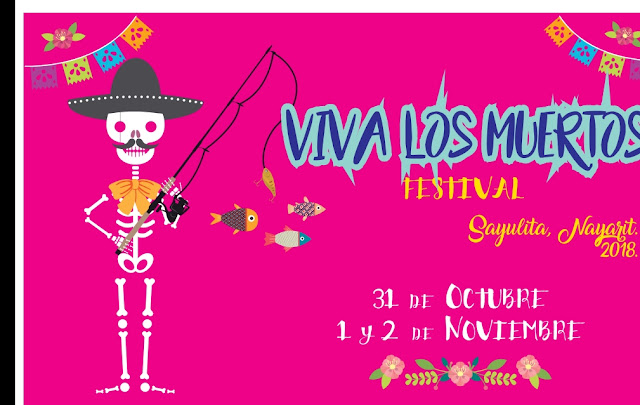 The Magical Town of Sayulita hosts its ¡Vivan los Muertos! (Long live the dead!) festival from October 31stthrough November 2nd with a varied program that includes an altar exhibit, pilgrimages, a nighttime procession to the cemetery, and the presentation of Nayarit’s international Ballet de Mexcaltitán.
According to organizers the event has been taking place for the past 7 years with the goal of preserving Mexican tradition. The Day of the Dead was recognized in 2008 as an Intangible Cultural Heritage by the UNESCO (United Nations Educational, Scientific, and Cultural Organization) and is probably one of the best-known celebrations within the country and around the world.
This event and the cultural and artistic nighttime walk from the main plaza to the cemetery is very much enjoyed by the locals though it has also become a big attraction for foreign visitors.
During the celebration the town’s narrow streets are bursting with color and the aroma of the cempasúchil flowers (marigolds) fills the air. The altar exhibit and contest on the main plaza is one of the event’s highlights thanks its vibrant colors, elegant catrinas, colored sawdust “rugs,” and figurines related to death.
Apart from the altars, the line of crosses with candles set along the sidewalks and primitive roads lighting the way to the cemetery for the pilgrims is another showstopper. The cemetery is located at the edge of Playa Los Muertos; here the locals keep watch in honor of their dearly departed.
October 31st was celebrated with a street parade with the Ejido charros and escaramuza (cowboys and cowgirls) with their traditional dress and their faces painted with skull designs. 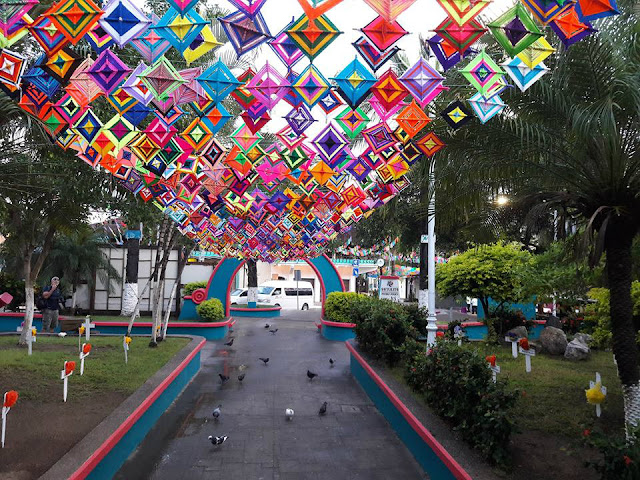 The entire town has an open invitation to the festival, which is the largest of its kind in the Riviera Nayarit. The program began on Wednesday at 7 p.m. with the charros and escaramuza parade beginning on 8:30 p.m.
The walk to the cemetery on November 1st was accompanied by mariachi and banda players at midnight. Events on November 2nd include a ceremony on the water dedicated to fishermen and surfers at 1 p.m. and the altar and catrinapresentation at 9:45 p.m. The festival ends at 1:30 a.m. with the Banda Norteña and the Banda Texanos.
For more details: https://www.facebook.com/sayulitalife/
https://www.facebook.com/Sayulitadiademuertos/ 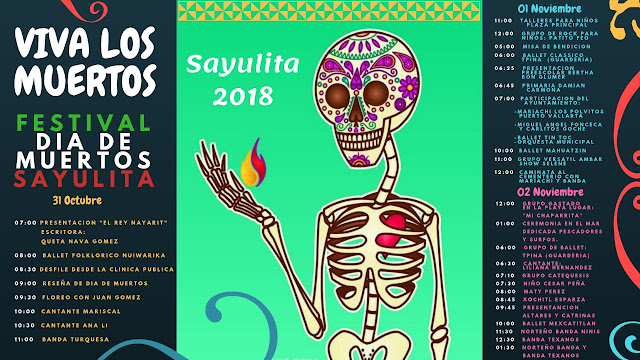 ****
The Riviera Nayarit Convention and Visitors Bureau (CVB) and the Bahía de Banderas Hotel and Motel Association (AHMBB) support cultural activities and musical events as part of their promotional efforts; these activities place the destination on everyone’s radar by generating visitors and exposure thanks to ample media coverage. These efforts are supported by the Government of the State of Nayarit via the Tourism Promotion Trust (Fiprotur).
https://www.rivieranayarit.com/wp-content/uploads/2019/07/logox300.jpg 0 0 1stonthelist https://www.rivieranayarit.com/wp-content/uploads/2019/07/logox300.jpg 1stonthelist2018-11-01 20:30:002018-11-01 20:30:00Long live the dead! Sayulita’s magical festival