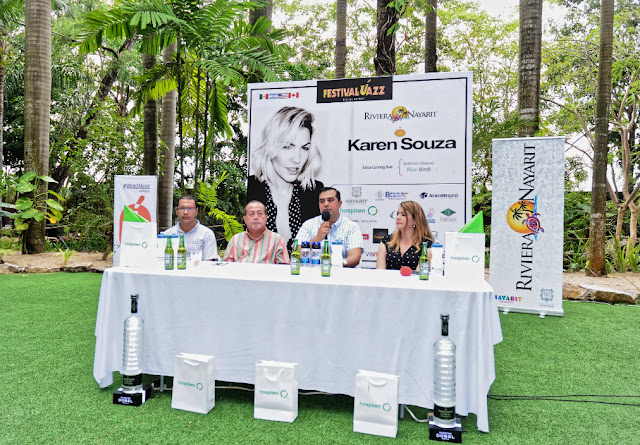 Karen Souza, one of the lead singers in the world of contemporary jazz, is headlining the 1st Riviera Nayarit Jazz Festival 2018 on November 16thwith her Velvet Vault Tour, offering top hits from her musical repertoire.
The event will take place at the Jardín Palmeiras in Nuevo Vallarta, the ideal place for an intimate musical evening, sensual and classy, much like the concerts offered by the singer herself.
The organizers shared event details during a press conference. In addition to Souza, two local artists will be part of the lineup: Santiago Venegas and the Blue Birds, represented by their singer, Lozana Díaz.
Israel Guerrero, managing director of the organizing committee, reiterated that although the concert was originally billed for tourists and foreign residents, it was a refreshing surprise to see how interested the local youths were in attending, as well.
Jesús Carmona, president of the Bahía de Banderas Hotel and Motel Association (AHMBB), indicated diversity is very important for the destination and the Riviera Nayarit works on a daily basis to achieve it via musical, sporting, and cultural events, as well as by hosting important conventions. This is why the CVB continually supports and encourages diversity within the destination’s activities.
Silvia Duarte, Groups and Events manager for the Riviera Nayarit CVB, announced that 30 percent of the concert ticket sales will be earmarked for the victims of hurricane Willa in the north of Nayarit, including the towns of Tuxpan, Tecuala, Acaponeta, and San Blas. 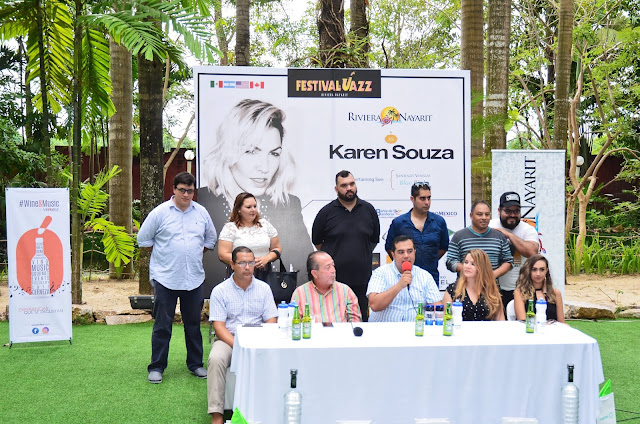 Concert Details
·      Karen Souza will be accompanied onstage by her musicians as well as the traditional jazz trio: piano, double bass, and saxophone.
The concert begins at 8 p.m. and will last approximately 3 hours. It will open with Santiago Venegas and the Blue Birds.
Tickets are on sale at Notaría Careaga in Paradise Village and Súper Colchones at Plaza Lago Real in Bahía de Banderas, as well as Plaza Galerías and Súper Colchones in Puerto Vallarta’s Marina Vallarta.
Cost: 1,500 pesos for general admission; 2,000 pesos for intermediate seating; and 3,000 pesos for preferred seating; all tickets include open international bar and hors d’oeuvres.
Contact and ticket sales: (322) 104 3924. | jazzrivieranayarit@gmail.com 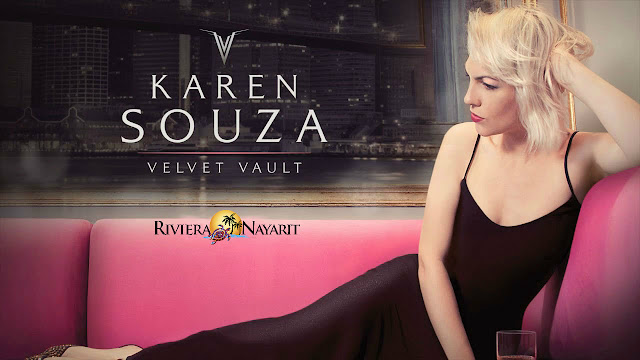 ABOUT KAREN SOUZA
Karen Souza was born in Argentina but established her career in the United States. Throughout her years onstage she concentrated on transforming rock and pop classics into more subtle, soft tones, easy on the ears, focusing on the bossa nova style with a low pitched voice that caresses the ear and slips into the unconscious.
Although she’s known for her jazz hits from the 70s, 80s, and 90s, she has added her own repertoire including Paris, Break my Heart, and Lie To Me.
Velvet Vault is the fourth studio album released by Souza within the jazz and bossa nova genres, produced by her in collaboration with Japanese musician, Toku. It includes versions of hits by Amy Winehouse (Valerie), Elton John (Don’t Let the Sun Go Down on Me), and 10cc (I’m Not in Love).
###
The Riviera Nayarit Convention and Visitors Bureau (CVB) and the Bahía de Banderas Hotel and Motel Association (AHMBB) support cultural and musical events through their promotional work, as these events generate visitors and major exposure thanks to the media coverage they receive. These efforts take place with the support of the Government of the State of Nayarit via its Tourism Promotional Trust (Fiprotur).
https://www.rivieranayarit.com/wp-content/uploads/2019/07/logox300.jpg 0 0 1stonthelist https://www.rivieranayarit.com/wp-content/uploads/2019/07/logox300.jpg 1stonthelist2018-11-06 06:15:002018-11-06 06:15:001st Riviera Nayarit Jazz Festival Presents Karen Souza in Concert

The Riviera Nayarit Focuses on Colombia

Polo Cup to be held this weekend at Riviera Nayarit

The Mexican Embassy in Chile promotes the Riviera Nayarit

Get surprised at Riviera Nayarit

SEE IT TO BELIEVE IT IN NAYARIT: 10 Spectacular Beaches The AHMBB Supports Professionalization of Hotel Staff
Scroll to top